#TuksGolf: Maimane is a future golf star in the making

The name Zinan Maimane will certainly not yet crop up in any conversation about the heroes of golf but don't forget his name as he might be a champion in the making.
The 11-year-old's results make for interesting reading.  In a career spanning only six years, the TuksGolf Academy player has bagged more than 50 trophies. He is also the youngest golfer to be selected for the GolfRSA National Squad which is sponsored by Johann Rupert.
The National Squad consists of some of the most talented young amateurs in South African golf. The aim is to help them represent South Africa in international tournaments. The program also aims to support those young players who have dreams to play professionally.
Asked how he feels to have made the "grade," Maimane said: "I am very honoured to achieve such a milestone, especially at my age. My goal was to make the National Squad at the age of 15."
Maimane, who is known for his shy smile and deadly drive, got introduced to golf when he was four.
"I used to accompany my dad and older brother to their golf practices and matches at Leopard Park in Mafikeng. At the time, I would only watch and play around with my brother's clubs. When we moved to Pretoria in 2014 at the age of 6, my dad decided to buy me clubs. I started taking golf lessons and fell in love with the game."
It did not take long before he started sinking the puts that mattered. In 2018 he won the Junior Africa Challenge Tournament and finished fourth in the US Kids Golf European Championship.
Another highlight was winning the SA Kids Team Challenge last year. He impressed by finishing 9th in the US Kids World Championship (under-11). His consistent good results led to him receiving the SA Kids Golf Best Average Stroke Player of the Year award.
When he is talking about golf, it is hard to imagine that Maimane is only 11. At times he sounds like a true seasoned professional, especially when talking about what he needs to do to improve his play and his goals.
"The long game is my strength. My coach Llewelyn (van Leeuwen) has done a great job to ensure that I keep on getting better and better. I still need to improve my chipping, but since I began working with coach Emile (Steinman), I have seen significant improvements. I am blessed to be part of the TuksGolf team.
"My goal for the next season is to win the Nomads Under-13, the Sun City Under-13 Challenge, the Gauteng North Golf Union Under-13 Order of Merit and the SA Kids Golf 11-12 Order of Merit. I would love to also participate in the US Kids European and World Championships."
Who would you like to play within your own "Fantasy Fourball"?
"Louis Oosthuizen, in a heartbeat! Then Bubba Watson and Tiger Woods."
He considers Royal Johannesburg as his favourite golf course but would love to play Eye of Africa.
Maimane's advice to young golfers is "before you move to the more advanced stuff, get the basics right".
- Author Wilhelm de Swardt
Share this page
Published by Leonore Jordaan 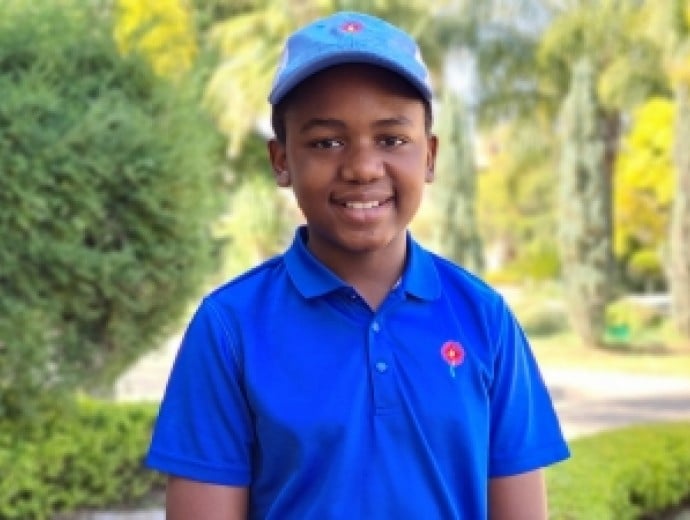