#TuksGolf: Maimane is a real perfectionist with a golf club in hand

Getting the nine-year-old Zinan Maimane (TuksGolf) to switch off the television or put away his PlayStation is not always easy, but it can be equally as challenging to get him to come home once he is playing golf.
One thing that is certain is that the youngster has got talent. During the recent Junior Africa Challenge Tournament played at the San Lameer Country Club in KwaZulu-Natal Maimane won the under-10 competition. He has also been selected for the Gauteng North under-13 team that will be competing in the Nomads Tournament.
The Tuks golfer is not only making his presence felt in local tournaments. When he played a junior tournament in Scotland, he finished fourth. He impressed everyone by leading over the first two days. Maimane played his first international tournament when he was only eight. It was in the USA. He finished 41th in a field of 118 players.
His mom, Lesego, said her son first started to play golf when he was just four years old. It seemed the logical thing for him to do so as his dad and elder brother also played.
“At first we did not really take note of Zinan’s attempts to play golf as his elder brother was at the time quite an avid golfer but as he seemed to lose interest Zinan got more passionate.
“There are still times when he gets annoyed when I tell him to stop watching television or playing games as he got to go and train, but the moment he steps onto the golf course everything changes. He does not want to come home. It is always a case of ‘Mom’ just wait a few more minutes as I just want to hit a few more balls to work on some technique. Zinan can be quite a perfectionist."
According to his mom, the best decision they made was to get Bradley Nienaber (TuksGolf) to coach Zinan.
“His chipping and putting have improved in leaps and bounds since Bradley started working with him. He also continues to play with greater confidence.”
To get the youngster to talk about his passion for playing golf is quite a challenge as he is a man of very few words. His reaction to the first question was to sigh so as if to say that can’t you see I am busy training and needed to be focused on ensuring I do what I am being taught right.
He again sighs at listening to the second question. After intently staring at his club for a long few seconds he said what he loves about golf is the challenge.
“No one day on the golf course is ever the same. There is always something new you got to try and master.”
Another sigh indicates that the interview is done.
Nienaber said the biggest challenge working with youngsters like Maimane is to make sure they enjoy learning new things.
The Webster sisters, Kaylee and Megan, who are also coached by Nienaber respectively finished third and second in their respective age-groups during the Junior African Challenge Tournament.
- Author Wilhelm de Swardt
Share this page
Published by Leonore Jordaan 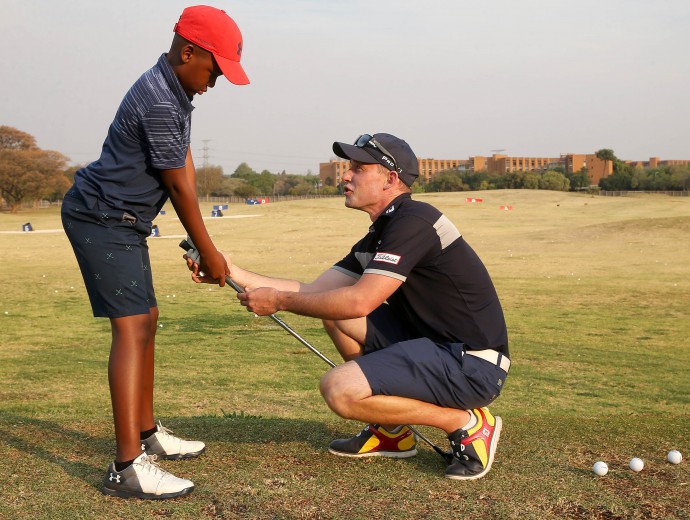