#TuksFencing: Tuks student relishes a fencing duel for more than one reason

There is a good reason for that. The fourth-year dentistry student at Tuks is an avid fencer. When a referee utters these words to start a fencing duel, it is as if she goes into the "zone". For those five or 15 minutes, an encounter might last only thing matters. That is to be better than her opponent.

"Every bout requires utter focus. You are facing two challenges. The first is to think of the different ways that your opponent might attack you, then you got to work out how you are going to counter. It can boil down to a new challenge every second.

"You got to be able to adapt. You cannot only learn one set of moves and rely on it over and over again. With experience, it is as if something else takes over something beyond the thinking mind. You learn to trust your instincts. That is why fencing is often compared to 'physical chess'," is the way Van den Berg explains her passion for the sport.

There have been numerous articles written in which it is claimed that fencing is one of the sports that can be beneficial to students. The Tuks student tends to agree from a personal perspective.

"When I am battling to understand something while studying, I would go fencing. Every so often, when I have finished, it is as if I got a whole new perspective on things. I took up fencing while still at school and immediately started to reap the awards. What was surprising is that my maths marks improved by 10%."

"It might be because, in fencing, it takes quick thinking and intellectual acuity to outsmart an opponent. I think once you have mastered this, it is easy to apply the same ability to your studies."

Once Van den Berg has finished her studies, the goal would be to see if she can compete more often internationally. The ultimate would be if she could qualify for the 2028 Olympic Games.

It is her dad, Johan, who made her realise that nothing is impossible if you are prepared to do the hard work.

"My dad set an example. For him, it always had been about practice, practice, and more practice as well as toughness and grit. His dedication did pay off. He won a silver medal at the World Masters pentathlon."

A definite highlight for Van den Berg was when in 2018 she and her dad both got to represent South Africa at the Commonwealth Senior and Veteran Fencing Championship in Canberra.

Johan van den Berg was the chairman of TuksFencing. Unfortunately, he died in a car accident last year.

Tuks fencers are allowed to resume training at the campus. 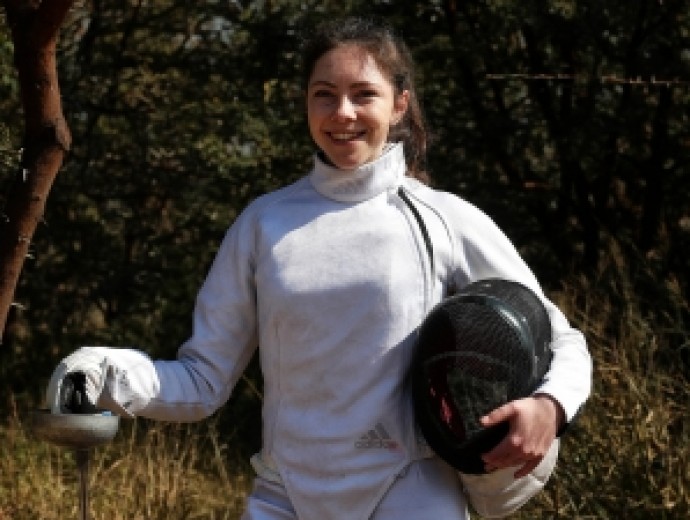