#TuksFencing: After 70 years Tuks fencers still strive to be the best

When a few Tuks fencers decided in 1950, it was high time to start their own club they would not have known the impact their initiative was going to have on the sport.

Seventy years later TuksFencing can lay claim to being possibly one of the oldest, if not the oldest, fencing clubs in South Africa. It is not the club's only claim to fame. From 1908 to now 17 fencers have represented South Africa at the Olympic Games. Eight of them were from Tuks.

The first Tuks fencers to compete at the Games were Trevor Strydom and Hein van Garderen. They did so in 1992 in Barcelona. In 2008 the Tuks fencers must have dominated locally as four of the club's fencers were selected to compete in Beijing.

Tuks's professor Wim Dreyer is without a doubt one of the sport's true ambassadors. From 1990 to 2018 he served as FFSA's secretary-general. A personal highlight was receiving accolades from the International Olympic Committee for what he has done to promote fencing as a sport.

An interesting statistic when it comes to South Africa's Olympic history is that three married couples competed at the Games at the same time. All of them had a Tuks connection.

Craig and Natalie Fulton played hockey for Tuks and went on to represent South Africa at the 2004 Games in Athens. Elvira Wood (Tuks) and her husband, Mike, competed as fencers at the 2008 Games in Beijing. LJ van Zyl (Tuks 400m-hurdles athlete) and his wife, Irvette (marathon), was selected for the 2012 Games in London.

As fencers, Elvira and Mike Wood proved that perseverance does pay off. Elvira was 34 when she competed at the Games and her husband 37. She readily admits that the two years in the built-up to Beijing was not easy.

"Our son was four years at the time. Both of us had to work fulltime to make ends meet. It meant we trained for six days a week until ten at night."

Thinking back, Wood admits that they must have been crazy to punish themselves like that.

"But then again, Mike and I are addicted to fencing. It is what we do. There are not many sports where you get the opportunity to 'clobber' someone with a weapon and get away with it," she joked.

When in her prime Wood won three South African titles in the sabre-category while being the runner-up on seven occasions. Mike Wood has got nine national titles to his names.

They are still fencing, now as a family. The younger Wood's Jason (15) and Callista (10) are apparently more than able to fend for themselves when duelling it out against the best.

The quest for perfection is one of the reasons why Wood is still passionate about fencing. According to her, active chess is an excellent way to describe the sport.

"When in a duel, there is not a moment you can allow your concentration to slip. If you do, it is 'tickets' as everything happens so fast. The whole time while you are moving forwards and backwards, you got to try and outthink your opponent. Sometimes you need to be able to change strategy midmovement." 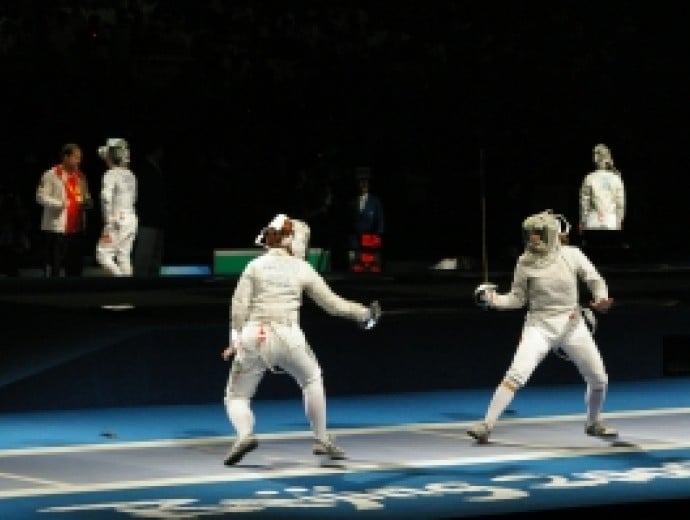