Natania Bester's hunger to get people to take note of fencing as a sport at Tuks helped her to win no less than three medals during the USSA Tournament in Cape Town.
She won a gold medal in the epee competition and bronze medals in the sabre and foil competitions. Bester was the only fencer representing Tuks at USSA's.
"Fighting for the university's honour was what kept me motivated during each of my fights," explains Bester whose weapon of choice is the epee. It is the discipline in which she represented South Africa at the World Championships earlier this year.
In the buildup to the tournament, she especially made time to do extra training to master the basic techniques of sabre and foil fighting. Her goal from the start was to win more than one medal for Tuks.
Bester is not quite sure but thinks she might have contested approximately 27 fights over three days during USSA's. According to her, fitness and being disciplined was crucial to her success.
"My training does not only entail trying to master the finer intricacies of fencing. I also spend hours in the gym. The focus is on working to improve my explosive power as well as stamina.
"Fencing can be quite intense. Your legs and arms are always working during a fight. You also got to be focussed. It takes a mere single lapse of concentration to lose a fight."
As youngsters, she and her brother (Christiaan) often used to have mock sword fights sparring with sticks. Something else they enjoyed was watching the legendary "Three Musketeers" sword-wielding exploits on the silver screen. The real moment that changed everything was when her dad overheard a discussion about fencing at Tuks on the radio. Afterwards, he convinced them to consider doing it.
According to Bester, she had always been keen on taking up a fighting sport, but she did not want to do something macho.
"What attracted me to fencing is that you get to fight and still be elegant. While watching fencing videos, I could not help but note how the female fencers made a real effort to remain feminine during competitions. Their makeup is always immaculate. What I especially like is the jewellery they tend to wear on the non-fighting hand.
"It is something I also like doing — my favourite ring when fighting is one with nine little sapphire stones. The colour is continuously changing.  Often when fighting, I would touch the ring with the epee's guard. It helps me to refocus and stay motivated."
Tomorrow Bester and her brother will be competing at the South African Open Tournament in Cape Town. Currently, she ranks second in her epee category.
- Author Wilhelm de Swardt
Share this page
Published by Leonore Jordaan 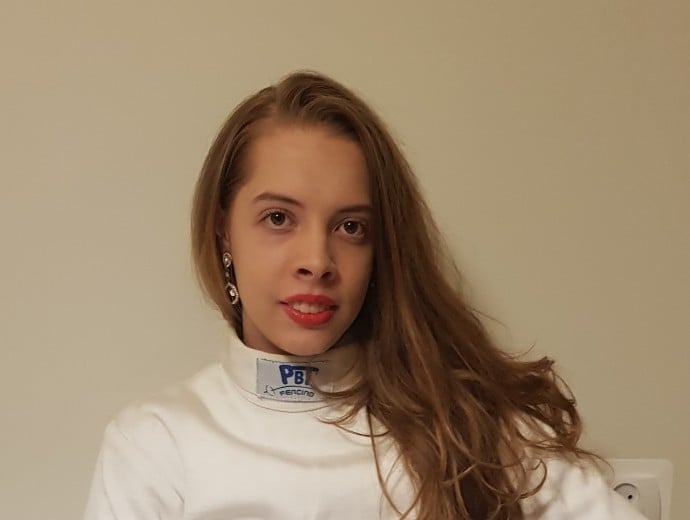