Students who battle to concentrate during classes or for whom frustration gets a new meaning while attempting to find a solution to maths problems should consider taking up fencing as a sport. It might just change their lives.

Janale van den Berg, a second-year dentistry student at Tuks recently won a Fencing Marathon Tournament in Prague. In the space of two days, she contested about 70 fights losing only a handful of encounters to ensure an overall victory.

To say that she is passionate about fencing would be a definite understatement. As far as she is concerned it a holistic sport which not only has distinct physical benefits but also stimulates one’s brain.

“I took up fencing while still at school. I immediately started to reap the awards. What was amazing is that my maths marks improved by 10%. Apparently, that is not unusual. I have read about a study that has been conducted in the USA at schools where the learners have the opportunity to fence. It was found that they were much more disciplined and did remarkably well in maths and science.

“From personal experience, I can say that since I have started fencing my awareness of what is happening around me has drastically improved. I am also able to concentrate for much longer and can understand complicated facts quicker.”

At first, Van den Berg was an avid pentathlon athlete. Unfortunately, a sport in which an athlete got to master the art of fencing, shooting, swimming, horse riding and running is time-consuming. So she was forced to make a choice.

“I chose to specialise in fencing. It was an easy decision as I am by nature an individualist preferring to do things on my own. Fencing is very different compared to other sports. In a competition like running, for example, the most significant challenge is just to get to the finish in the fastest possible time.

“As a fencer, you got to think all the time. It is very much like chess. Every opponent has her unique style favouring certain techniques. The challenge is to figure it out as quickly as possible and then plan counter attacks. All of this got to be done in mere seconds. That is what makes fencing so exciting.”

While most athletes chose to take time off over December Van den Berg was in Europe honing her fencing skills. She was in Budapest where some of the fencing instructors taught her to master some of the finer intricacies of the sport. She also got the opportunity to train at various clubs and attend a coaching clinic. Van den Berg proved to be an apt student when she won the Prague Tournament.

Her long-term goal is to try and represent South Africa at the 2024 Olympic Games.
“To do so, it is important to start now already to gain as much international experience possible and slowly improve my international ranking. My short-term goal is to give a good account of myself during the African Tournament in July in Tunisia.” 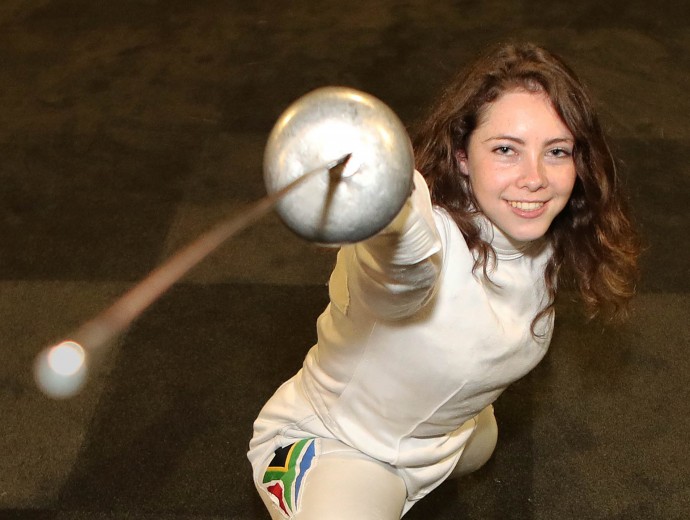