In the last 15 years, electric fences have become a popular choice for the control of animal movement on game reserves, private game farms and commercial farms – ensuring livestock and wildlife stay in the confines of the farm and unwanted predators and people stay out. Electric fencing, although economical and effective, do however result in electrocution of non-target species. Among them are tortoises, and they are rapidly moving up on the Cites list of endangered animals. The highly endangered pangolin, the African Bull Frog, porcupines, rock pythons, rock monitors and other small animals are also victims.

South Africa is home to a third of the world's tortoise species. Eleven of the 14 species found locally are endemic only to Southern Africa, which means that they occur nowhere else in the world. South Africa is home to one of the world's rarest tortoises as well as the smallest. The elusive geometric Tent Tortoise (Psammobates geometricus) is found only in the low-lying renosterveld shrublands of the Swartland, Upper Breede River Valley and Ceres Valley of the Cape. The world's smallest tortoise, the Speckled Padloper (Homopus signatus), reaches no more than 8cm.

The reproduction rate of tortoises mimics the speed at which they walk – slow. The smaller species take about eight to 10 years to reach sexual maturity, while the large Leopard Tortoise takes about 15 years before it is ready to reproduce. Most tortoises lay no more than two eggs per year. Unfortunately the odds are often against their survival.

Despite the slow reproductive rate, tortoises have for millions of years managed to maintain a healthy population. However, today their future existence is precarious. Dr Luke Arnot of the Faculty of Veterinary Science at the University of Pretoria has looked into the various threats tortoises face, finding electrocutions from electric fencing to be one of the main causes of their death.

The high incidence of death among tortoises is attributed to their instinctive defensive reaction – withdrawing into their shells when they are hurt or frightened. 'Therefore, when a tortoise receives a painful electric shock, instead of pulling away from the cause, it withdraws its head and limbs into its shell. In so doing, the shell remains in contact with the live wire. This results in the animal receiving continued shocks,' Arnot explains. This leads to death from organ failure, direct damage to tissue due to heat or electrolysis, or sun exposure once the animal has been disabled.

Dr Arnot has engaged with farmers in the Karoo where tortoises used to be plentiful to analyse this pressing problem. One farmer reflected on how there had been an abundance of tortoises when he started farming in the area 10 years ago. Today he is lucky if he sees one. Another farmer counted 128 dead tortoises along a 200m stretch of electric fence. Should the use of such fencing continue, tortoises in the wild will definitely soon become extinct in the country.

While there is no legislation in South Africa regarding the erection of electric fences and the impacts this has on wildlife, there are some simple and effective solutions to prevent the appalling deaths of tortoises and pangolins. 'Farmers and electric fence contractors can take steps to minimise electric fence mortalities among non-target species, while still ensuring that fences serve their intended fpurpose,' Dr Arnot maintains.

Dr Arnot has worked with Steven Molteno of the global network, Local Governments for Sustainability, to raise awareness of the issue. They have provided landowners with the following simple solutions:

Raise the tripwire (or lowest live strand of the main fence) as high as possible, ideally to at least 250 mm. This means that most tortoises will not even brush against it. Only the largest specimens will come in contact with a 250mm-high tripwire.

2. Distance of tripwire from fence

If possible, set the tripwire 400 mm to 500 mm away from the main fence. This measure will only help if the tripwire is raised.

Place a physical barrier, such as large rocks along the base of the fence. This rocky 'apron' should be high enough to divert tortoises and pangolins away from the fence, and prevent them from coming into contact with live electric wires. It will also go a long way towards preventing predators and other species from pushing or digging under the fence. In fact, it could even obviate the need for a tripwire. This is an inexpensive option, especially if the farm has rocky terrain.

4. Switch off during the day

If the purpose of the fence is to deter predators and keep them away from sheep, goats or wildlife, remember that predators, such as jackals, are typically nocturnal. Tortoises, by contrast, are strictly diurnal. This means that you can install duty cycle or timer switches on the fence, which turn off the electric current during daylight hours when tortoises are active, and turn it on again at night when predators hunt. Using such a timer could also help to reduce electricity costs by up to 50%.

5. Use mesh lower down

Another option is to use a mesh wire barrier, such as diamond mesh, on the lower section of the fence, instead of installing electrified wires close to the ground.  Such mesh fences inhibit the movement of small predators and prevent them from getting under the fence, especially if combined with a rock-packed apron. Live wires can still be used higher up on the fence.

Other threats jeopardising the tortoise population in South Africa are fires, road kill, the pet trade and the muti trade. While natural fires have always occurred, the increase in fires today is largely attributed to humans. Poor land management, starting fires and not being able to control them and other irresponsible practices is having a devastating effect on wildlife that is unable to escape in time. Tortoises often get killed on roads, particularly after rain when they venture onto the road for water. Both the muti and pet trades are atrocious, illegal practices resulting in a decrease in the tortoise population. People sometimes ignorantly remove tortoises from the wild and take them to areas that differ in vegetation and climate, and where they are unable to adapt and cannot survive.

There is a dearth of research on this animal in South Africa. Funding for research is limited because tortoises are not regarded as a popular research species choice. Dr Arnot however hopes to raise the awareness about the dwindling tortoise numbers in South Africa before it is too late by publishing research and writing on the topic.

*Dr Luke Arnot is a member of the surgery team at the Production Animal Studies of Onderstepoort Veterinary Academic Hospital. He is involved in Onderstepoort's community work in the area, assisting poorer communities in keeping their production animals healthy. He lectures in bovine health and production. 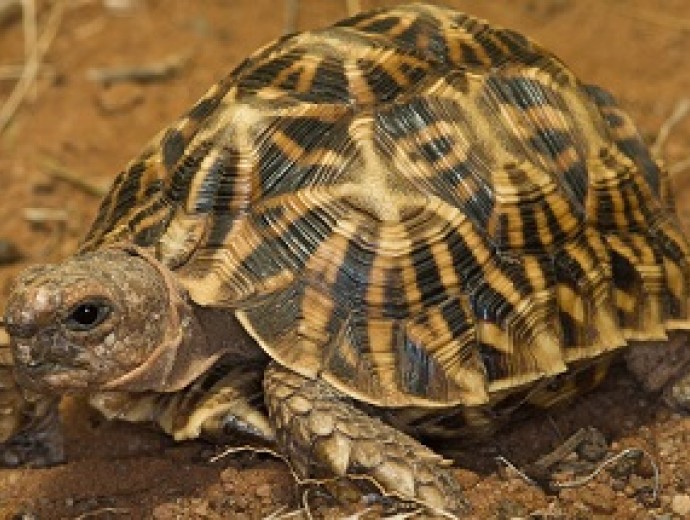