Dr Wastberg, who is a member of the Swedish Academy, spoke at the University of Pretoria’s (UP) Hatfield Campus on Encounters with Nadine Gordimer and Other African Writers.

The annual lecture series was established at the University of the Witwatersrand (Wits) to pay tribute to the great South African writer, and to bring other important writers to Johannesburg to address the University and broader South African community. The lecture has been co-hosted from time to time with other South African universities and this year UP joined Wits in hosting the lecture.

Dr Wastberg used the lecture to share more about his friendship with Gordimer that lasted over five decades after the pair first met in 1959 following the former’s expulsion from Zimbabwe (then Rhodesia) for his anti-colonial stance.

He reflected on Gordimer’s ability to sacrifice her own comfort in order to dedicate her work to fighting for equality for all South Africans. “In spite of her taking part in demonstrations, giving speeches and travelling across the world to promote causes, she was intensely private and stayed in her study from early morning until late lunch. She kept her lights on inside South Africa out of her commitment to black liberation and both for the sake of her own creativity, and that of black South African writers who were silenced and for whom she had to speak,” Dr Wastberg said.

He described her novels and essays over the years as having been instruments that could be used to penetrate a society that defended itself against scrutiny for its hypocrisy and its censorship. He added that through the major themes in her work – love and politics – readers were forced to interact with their history and to halt its production of a society built on lies.

Dr Wastberg, a former president of PEN International, said the Nobel laureate wrote 12 novels, 200 short stories and seven volumes of essays as though censorship at that time was not a reality. “Her work reflects the vibrations of this country. She wrote as if censorship didn’t exist. Gordimer created individuals who made moral choices behind closed doors and in the public sphere. She painted a social background subtler than anything presented by political scientists. Thus providing an insight into the roots of the struggle and the mechanisms of change that no historian could have matched,” he said.

Providing listeners with a brief, yet deliberate moment of vulnerability, Dr. Wastberg said he and Gordimer regarded each other as brother and sister – with them being 10 years apart in age. Nadine was older. “Born same month, same day and time of the night, so we felt like sister and brother. She was 35 when we met, she was 90 when we met for the last time. Thanks to our friendship of more than 55 years, 12 visits to South Africa, I stayed in her house longer than anyone else’s.”

Dr Wastberg expressed his disappointment at the lack of emotion that came from the country, particularly the government, when Gordimer died in 2014:

“Nadine wrote her last book about her dead friends. ‘Had you died, I would have included you,’ she said. ‘And vice-versa,’ I replied. I am celebrating her now. And when she died in July 2014, there was no comment, much less a memorial service for the Nobel laureate honouring her for her great work towards the freedom of South Africa. In her Nobel Lecture, Gordimer warned that an author risks both the state’s condemnation and the freedom movement’s complaints that she fails to demonstrate blind loyalty. But she explained: ‘The author serves humanity only as long as he uses the world against his own loyalties’.”

Dr Wastberg is a globally respected figure for, among other things, his championing of African literature in Europe before it was popular to do so. He was awarded the Order of the Companions of OR Tambo in Silver in 2008 by the South African government for his contribution to the fight against colonialism in Africa and apartheid in South Africa through literature. The award is one of the National Orders awarded to foreign nationals who have actively promoted the interests and aspirations of South Africa through outstanding cooperation, solidarity and support.

Dr Wastberg, who established the Swedish branch of Amnesty International, came into contact with key anti-apartheid activists through his work with the International Aid and Defence Fund, helping to channel funds in support of lawyers defending political prisoners.

He closed off the lecture with the sentiment that Gordimer’s work had played an instrumental role in how South Africans saw themselves: “Nadine Gordimer’s novels have helped people understand their own nature and have made them realise they are not powerless. Her work has grown into a psychological chronicle of half a century in South Africa.” 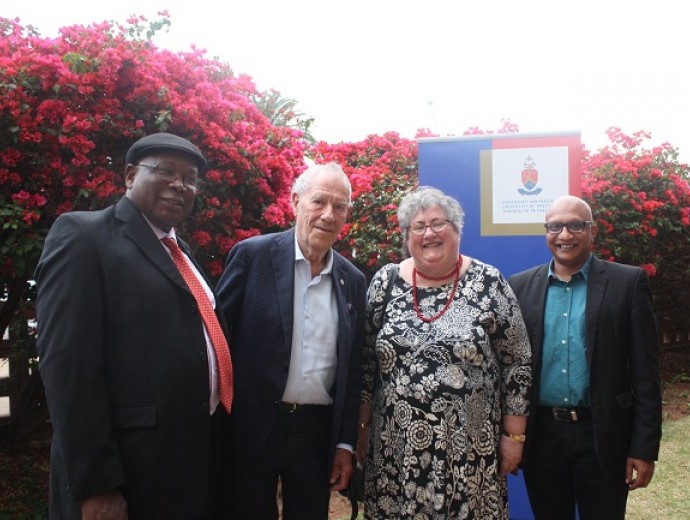 Prof James Ogude, Director of the Centre for the Advancement of Scholarship; Prof Vasu Reddy Dean of the Faculty of Humanities; and Prof Molly Brown, Head of the Department of English, are pictured with Dr Per Wastberg ahead of the Nadine Gordimer Annual Lecture.