Third round of the ASLP connects young science leaders across Africa

With the complex challenges facing the world, and especially Africa, an adaptive and collaborative style of science leadership is required. The Africa Science Leadership Programme (ASLP) was launched in June 2015 to address this, and recently concluded its third round of interactions with fellows from across Africa. The programme is part of the Future Africa initiative of the University of Pretoria (UP) and is being conducted in partnership with the Global Young Academy, KnowInnovation and the Robert Bosch Stiftung. It serves early-career researchers in basic and applied science, engineering, social sciences, the arts and the humanities, using a highly interactive approach to training, application of skills to leadership projects, peer support and mentorship.

Prof Bernard Slippers, who leads the Future Africa and the ASLP initiatives at UP, has said, 'African science is brimming with potential, but is currently underdeveloped. The Africa Science Leadership programme recognises the need for quality and collective leadership skills among the next generation of scientists, who are steering the development and expansion of science on the continent.' The eight-day ASLP workshop commenced on 22 March, and for the first six days it focused on the new group of 21 fellows. The intensive programme cycled through theory, application and reflection. Participants were challenged to work collaboratively to design initiatives that would advance a new paradigm for their field.

On day six, the 2016 cohort of fellows returned and the two groups interacted before attending a Gala event in the evening. The Gala event showcased the fellows and their visions for African science development, as inspired by the programme. The remainder of the programme was spent following up on the progress of the inaugural cohort's projects and reflecting on the year of learning.

ASLP works closely with a number of experts and partners

Prof Derick de Jongh, Director of the Albert Luthuli Centre for Responsible Leadership at UP, joined the workshop on the first day as a provocateur. Prof De Jongh shared his thoughts on leadership, which provoked rich discussions among the fellows. Prof Cheryl de la Rey, the Vice Chancellor and Principal of UP, officially opened the workshop on day two with an address in which she shared her insights on the impact that scientists have on global thinking. Dr Willem Fourie, Ethicist at the Albert Luthuli Centre for Responsible Leadership, and Prof Tinyiko Maluleke, Professor in African Spirituality and Culture in the Faculty of Theology, also joined the workshop on day two. They shared their thoughts on the different facets of leadership and engaged with the fellows through lively discussions. Anina Mumm of ScienceLink joined the third cohort and facilitated learning on science communication and how to connect with audiences as a leader.

Prof Howard Alper, a distinguished Professor from the University of Ottawa, acted as mentor to the fellows and the ASLP team. Prof Alper shared insights from his career in science, covering a multitude of topics including science excellence and ways to increase research quality at universities, science advice to governments, science communication in general and international science networks. The group was also joined by mentors Dr Eva Alisic, former co-chair of the GYA and Senior Research Fellow at Monash University, and Dr Orakanoke Phanraksa, current co-chair of the GYA and Manager at the National Science and Technology Development Agency. Dr Alisic and Dr Phanraksa are deeply invested in the ASEAN leadership programme that was developed and modelled on the ASLP. Mr Arun Sharma, founder of Infinite Potentials Consulting (IPC) and past Managing Director of the Next Einstein Forum (NEF), joined the workshop as a mentor to the fellows and the leadership team. Mr Sharma has extensive experience with capacity-building of science and technology in Africa. Three leaders of the African chapter of the International Network for Government Science Advice (INGSA), Dr Tolu Oni, Dr Sameh Soror and Mr Christian Acemah, hosted a session on science advice to governments in Africa. INGSA provides a forum for policy-makers, practitioners, academies, and academics to share experience, build capacity, and develop theoretical and practical approaches to the use of scientific evidence in informing policy at all levels of government.

Another exciting aspect of this round of the ASLP was the presence of two representatives from the programme's key funder, the Robert Bosch Stiftung. Dr Katrin Rehak and Ms Johanna Rapp joined the ASLP on the day that the two cohorts overlapped. They visited the Future Africa site and attended the ASLP Gala dinner. The Robert Bosch Stiftung has been a key partner of the ASLP from its inception and is deeply invested in Africa's young scientists. They believe that Africa's young scientists have great potential to shape a sustainable future for their own continent and beyond.

More details about the ASLP programme:

The ASLP programme identifies early-career academics who display leadership potential and an interest in developing their skills. It supports them in applying the skills they acquire to projects that are relevant to the development of their academic career. It also creates a network of early-career academic leaders that spans disciplinary boundaries, and advances a curriculum for the development of academic leadership, which can be utilised by others. The workshop covered elements of collective leadership, creative and systems thinking, development of effective networks, stakeholder engagement for change, maximising the efficiency and impact of collaborative efforts, advanced dialogue and communication skills, and effective problem-solving and decision-making.

The programme aims at continuing the formation of a community of like-minded researchers in Africa, who possess qualities that will contribute towards solving the complex challenges that face this continent. As one of the fellows said in their anonymous feedback: 'I have learned a lot during the week. Being among other leaders has empowered and energised me, and increased my confidence levels. All that I have learned this week has lit a fire in me to do more to promote science in society and to take my place as an African science leader.' 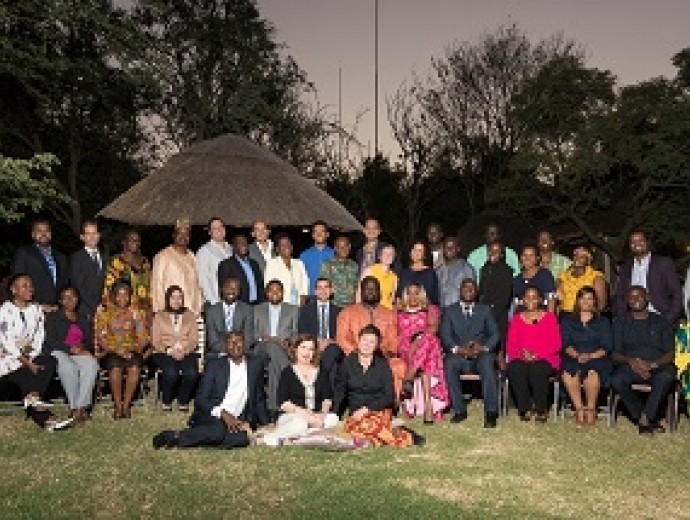