Global population growth and migration from rural areas to cities has resulted in human settlements being concentrated in urban areas. A consequence of these patterns is an increase in consumption of food and other natural resources, as well as an increase in the production of waste. In Africa it has been calculated that close to 50% of solid waste to landfill is organic, largely comprising food waste. This has led some researchers to devise ways in which to "close the loop" between waste and food production by recycling nutrients that would otherwise be lost.

Agricultural, industrial, and household organic waste can be transformed into value-added products using a process termed "bioconversion". One promising approach is to use flies that are naturally associated with the breakdown of decaying material to convert waste into body mass. The flies can then be harvested and used as a source of proteins and fats that can be fed to livestock and farmed fish. Wild birds and fish would normally eat insects and a feed enriched with insect components represents a "paleo diet". Alternatively, flies reared on waste can also be converted into biodiesel.

To be able to convert the large quantities of organic waste produced by agriculture and other human activities and produce these value-added products, enormous numbers of flies are required. For this reason, and to reduce the space and resources required to house them, flies need to be kept at very high density. But just like some people who prefer the cosmopolitan lifestyle of living in cities, some fly species are better able to handle the pressures of living in crowded conditions and thrive when given the opportunity. For this reason, Nina Parry and Chris Weldon from the Department of Zoology and Entomology at the University of Pretoria have worked to establish which of four blowfly species could cope best when living at high density. Blowflies are easy to work with and are naturally associated with decaying meat and manure, and therefore could be a good option for the bioconversion of these organic waste types.

The four fly species that have been tested are commonly found around your garbage bin: the African latrine blowfly, oriental latrine fly, copper-tailed blowfly, and green bottle fly. Flies of each species were kept at densities of 20, 50, 100, 250, 500, and 1 000 flies per 30 × 30 × 30 cm cage with an even number of females and males. Observations were recorded of the time it took for 50% of the flies to die, the number of eggs laid, and the number of eggs that hatched.

The species that had the lowest mortality while maintaining high egg production at a high density was the African latrine blowfly, which makes it the best-suited species that was assessed for the conditions experienced in bioconversion facilities. The green bottle fly had much higher egg production than any of the other species, but only at low density, which is not ideal for efficient use of space within a bioconversion facility. The copper-tailed blowfly also produced high numbers of eggs, but survival and egg production were low at higher densities. Fertility of the oriental latrine fly did not change in response to density, but this species had low egg production, making it less suitable for the production of large numbers of larvae for bioconversion of waste when space is limited.

Further research is required to test the suitability of blowfly species for the degradation of particular waste materials and conversion into usable body mass. However, results so far indicate that the African latrine blowfly is a promising candidate for use in bioconversion facilities due to its adaptability to crowded conditions. These flies could well be the new savvy city-goers of the fly world.

These results are published in full in: Parry, N.J., Pieterse, E. and Weldon, C.W. 2017. Longevity, fertility and fecundity of adult blow flies (Diptera: Calliphoridae) held at varying densities: Implications for use in bioconversion of waste. Journal of Economic Entomology. DOI: 10.1093/jee/tox251 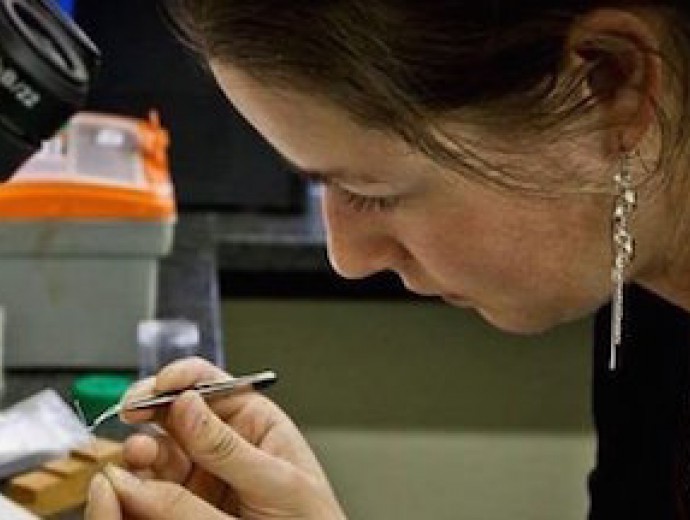 To be used for bioconversion, flies need to tolerate crowded conditions