#TuksArchery: "There is talk of a wildcard entry for the Games," — Shaun Anderson

The South African paralympic archer Shaun Anderson's hope of competing at the Tokyo Games might have been ended by the Covid Pandemic.

Last night he was informed that no South African archers can compete in July in the Czech Republic. It has to do with the Covid travel regulations. The Tuks archer had banked on being there.

"Everything I have been doing this season had been geared to be at my best in the Czech Republic so I can qualify for the Games. It is the last opportunity to do so. Now I can't compete.

"There is talk of a wildcard entry for the Games, but it will be foolish to get one's hopes up. There are two of us who had a realistic chance of qualifying. Now it seems if one of us might go to Tokyo and one is going to stay.

"I won't lie. I am devasted. But feeling sorry for myself is not going to help. I got to find a way to stay focused. That is why I will be competing this weekend. The aim is to shoot a good score. I am going to keep on doing it every time I compete just in case I do get the opportunity to go to Tokyo," said the Tuks archer.

According to Anderson, he was in good form earlier this season. During one of the competitions, he shot a score of 352, which would have been competitive had he been competing internationally.

"As luck would have it, I developed kidney stones the week before the national championship. Still, I competed. It was against my doctor's advice. I managed to shoot a score of 320 in the first round. Then the pain got too much. I could not focus anymore. A few days later, I was in the hospital."

Anderson lost the use of his left arm after a motorbike accident in 2004. He, however, managed to piece his life together to fulfil his dream of representing South Africa at the 2016 Games in Rio. He finished 17th.

Then a catastrophe struck again. Anderson was in a motorboat accident which left him paralysed from the waist down. Despite these setbacks, he remains upbeat, trying to live life to its fullest.  In 2019 he represented South Africa at the World Archery Championships in the Netherlands.

When asked what motivates him, the Tuks archer said, "I want to be one of the best in the world. To do so means you can never give up no matter what challenges you face." 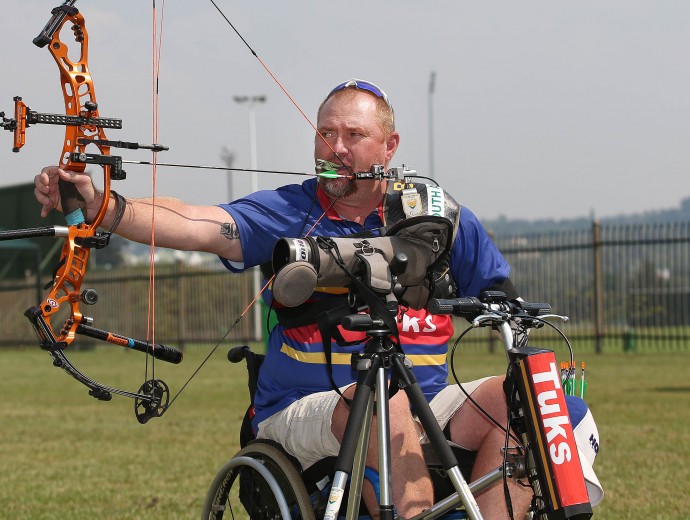