#TuksArchery: "I can't imagine life without archery. The sport has become part of my DNA,” says Johan Wilsenach

The first time Johan Wilsenach of TuksArchery, touched a bow, changed his life in many ways he could not even have predicted. At that time, he was only five years old.

He often imagined being in the midst of "Indian and cowboy wars" with his bow in hand when playing. The Indians were always the heroes. His version of Robin Hood hardly ever missed. The knights he led won "wars".

At age seven, "playtime" stopped. Wilsenach got his first real bow - a compound bow - and started to compete. To shoot at targets with winning being the ultimate prize is what got his adrenaline pumping.

When listening to Wilsenach talking about his passion for the sport, it is easy to understand why. There seems to be something relaxing about pulling back a bowstring, pitting yourself against the draw and feel the bow in your hands.

Seasoned archers say the sound of an arrow as it is released has a smoothness to it that is hard to explain to the uninitiated.

"I can't imagine life without archery. The sport has become part of my DNA," says the Wilsenach

He is currently studying a BSc Zoology at UP-Tuks.

Wilsenach got an opportunity to compete in Argentina when he was ten. Three years later, he made a vital decision. He switched from competing with a compound bow to shooting with recurve bow. He had a good reason for doing so.

"My goal is to compete at the Olympic Games. That is a recurve competition."

However, his immediate goal is to get a good result at the upcoming 2021 South African Archery Championships to take place on 2-4 April in Johannesburg. If he does, he will have a real chance to represent South Africa at the 2021 World Student Games and the World Archery Youth Championships in Perth, Australia.

The Tuks archer is under no illusion as to what it takes to become one of the best.

"Train a lot," he says. "And you can go as far as you want. It has been proven that the number of arrows you shoot determines how good you will be. The world record holders and champions in our sport shoot up to 1000 arrows a day.

"I have found that the more I shoot, the better my technique becomes, the stronger I get and the more confidant. The reality of our sport is that you never can rest on your laurels. You can continually improve on things like the thought process, your breathing, mental focus, etc." 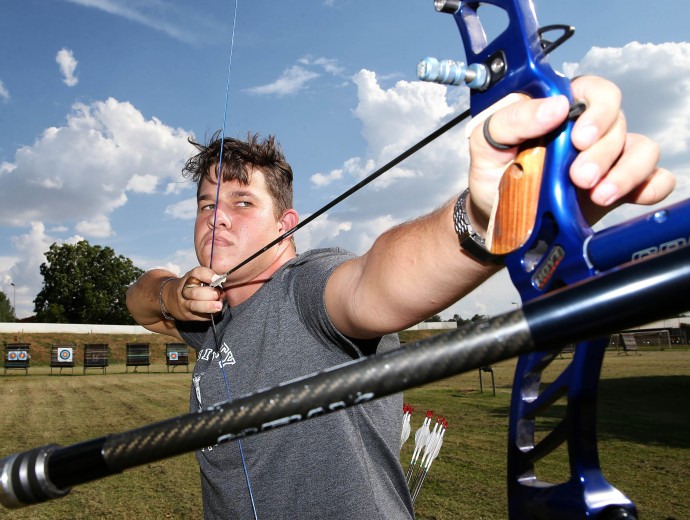