Twenty-two outstanding scientists from major regions in Africa will participate in the second round of the Africa Science Leadership Programme (ASLP). The scientists represent basic and applied sciences, and span a wide variety of disciplines including the social sciences and humanities.

The programme starts on 11 April with a week-long workshop on ‘Leading a new paradigm for African Science’. The fellows will delve deep into topics such as collective leadership and science communication. Leaders in academia and research, science communication, and leadership theory and practice will join the fellows for interactive sessions. The workshop will be followed by a year of application and mentorship, with a follow-up workshop planned for April 2017.

The 2016 ASLP fellows will meet with the inaugural cohort of 2015 fellows on 16 April, when the 2015 fellows start their second workshop.

‘The ASLP has gained prominence regionally and even globally since it was launched in 2015. It provides for a key need among young scientists in Africa, and is an example for other regions in the world,’ said Eva Alisic, co-chair of the Global Young Academy.

‘There is a big need to develop the skills of the next generation of scientists so that they may lead more interdisciplinary, globally connected teams in addressing the complex challenges the world faces. The ASLP is fast becoming an example of the type of programme through which this development can be fast-tracked,’ added Professor Bernard Slippers, project leader from the University of Pretoria and former co-chair of the Global Young Academy.

The following fellows have been selected to participate in the second round of the programme:

The ASLP is run by the University of Pretoria in partnership with the Global Young Academy, and is funded by the Robert Bosch Foundation. It involves collaborations with, among others, the Leopold Leadership Program at Stanford University and a specialist facilitation company, KnowInnovation.

For more information about the partners involved in the programme, visit their respective websites at: 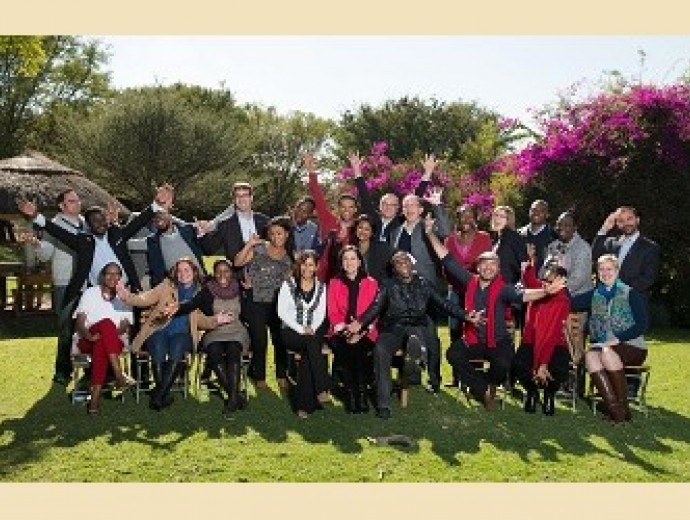 The 2015 ASLP fellows with Prof Cheryl de la Rey, Vice-Chancellor and Principal of UP