“Katsuzo! Zettai makenai!” This is Japanese for “I will win! I’ll never give up!”, and it’s a phrase that certainly applies to Lisa Sanders, who’s just graduated with a master’s degree in Translation and Interpreting Studies, from the University of Pretoria’s Department of African Languages. The focus of her dissertation was on translation and subtitles in Japanese animation (anime).

But doing a study on Japanese culture through an African languages department isn’t the unique achievement of Lisa’s story – she has overcome indescribable odds on her road to academic success having survived cancer four times.

Lisa suffers from a rare condition called Li-Fraumeni Syndrome, which is characterised by a mutation of the TP53 gene, one of the genes that usually suppresses the growth of tumours. As a result, her risk of cancer is much higher than usual. At just two years old, Lisa had pleomorphic rhabdomyosarcoma (cancer of the soft tissue) in her right leg; at the age of 10 she had osteosarcoma (a type of bone cancer) in her right leg, which through surgical complications resulted in her leg being amputated above the knee. At 21 she developed osteosarcoma again, this time in her left leg, and at 25 she was diagnosed with colon cancer.

“There’s no way to tell if and when I will get cancer again,” Lisa says. “It is typically a hereditary condition, but I am the first in my family to develop the mutation.”

Looking back and moving forward

Ironically, Lisa didn’t do her master’s through the Centre for Japanese Studies, though last year, she worked at the centre as a research assistant. She is passionate about languages. “For my undergraduate degree, my two major subjects were Latin and Psychology; I switched from Psychology to Translation Studies for my honours degree,” Lisa says.

She was first exposed to Japanese through anime. “I really loved how completely different the language was from anything else I’d heard before, in terms of grammar especially. I also used to do judo when I was younger, after losing my leg, so I’d been exposed to some aspects of Japanese culture. I started learning Japanese in 2011, and became more interested in the country and the people. I find it a fascinating, beautiful culture. Of course, Japanese food is also one of the strong drawcards for me!”

Lisa is planning to do her PhD in Japanese Studies at the Tokyo University of Foreign Studies in Japan. Although she’s thinking about her research proposal, she’s taking a break from academia and currently working at the Embassy of Japan. “In June I’ll be attending the eighth Media for All conference, in Stockholm, where I'll present a poster about my research. I’m quite nervous, but excited about the opportunity!”

With all the health challenges she faces, how does she push on? “It just seems futile to sit back and feel sorry for myself, and not do what I want to do,” she explains. “While I may get down sometimes about everything that's happened, I can’t change it. So I keep moving forward!”

Looking back at her time at UP, Lisa says her fondest memory of campus life was Orientation Week in first year. “It was exhilarating to finally be a student at UP, and the energy around that time was electric. I didn't know what lay ahead for me, but all the potential was tangible and utterly thrilling. Now when I walk on campus, it feels like an old friend, and that’s also wonderful in a different way.”

Lisa also credits people such as Mrs Renée Marais, a senior lecturer in the Department of African Languages, and her supervisor, Dr Helena Kruger-Roux – who got her into subtitling – as having had a significant impact on her life. “I also have really fond memories of Professor Karen Harris. I never actually had class with her but I used to sneak into her history lectures! She’s something of a mentor and a friend to me, and the person I look up to most. I wouldn't be where I am today without having met her.” 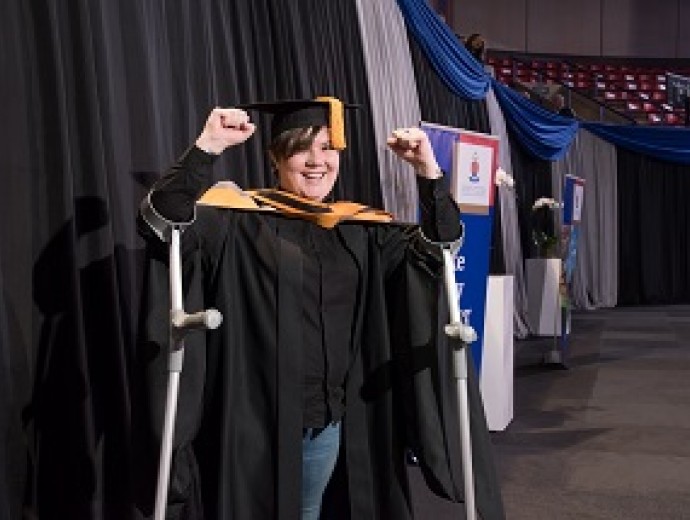 Lisa Sanders has overcome seemingly insurmountable odds to graduate with a master’s degree from the University of Pretoria.