During the winter recess, six members of the Department of African Languages attended four international conferences in the USA, Thailand and South Africa, and one staff member co-presented a workshop for university students. The topics and themes of the various conferences and papers reflected the research foci of our Department, i.e. gender studies, lexicography, terminology, dictionary compilation, and aspects of language, literature and culture.

The Head of the Department of African Languages, Prof. Mpume Zondi, travelled to Philadelphia (Pennsylvania, USA) to read a paper entitled Literature as a device of alerting humanity about gender-based violence as a social ill: Authors’ contribution to gender-based violence (discourse) at the 16th International Conference on ‘New Directions in the Humanities Research Network’ (5–7 July 2018). At this very large conference, which hosted delegates from more than 36 countries, the plenary speakers emphasised the role of humanities as a pillar of scholarship in higher education scholarship. Although a large number of parallel sessions were implemented, Professor Zondi’s paper attracted much interest. She writes, ‘[The paper] was well received, judging from the dialogue that followed. Amongst a few observations, I was overwhelmed that the concept of Ubuntu, which emerged during my presentation, drew so much attention from the audience, even an interest in knowing the original language from which the term comes. I am indebted to the Deanery for support from the Mellon Professoriate Fund, which made it possible for me to attend the conference.’

Lexicography and its related fields represent the most prominent research focus in the Department. This is not only evident from both the number of staff members who participated and their respective topics, but also from the accolade bestowed on our former Head of Department, Prof. Danie Prinsloo, who was awarded honorary membership of Afrilex in recognition of his many years of service to this Association and his very important (past and ongoing) contribution to the field of (South African) lexicography. We are proud of him and privileged to have access to such a fount of knowledge in our Department.

The fourth paper was contributed by Dr Sponono Mahlangu, who considered The inconsistencies found in terminology: A case in isiNdebele (more to follow).

Reflecting on the 23rd International Afrilex Conference, Ms Brenda Nomadlozi Bokaba, a lecturer of IsiZulu in the Department who attended Afrilex for the first time, testified that the conference had instilled in her ‘an interest in the compilation of dictionaries and what this process entails.’ The conference dealt with lexicography at large: the first keynote address dealt with dictionaries in relation to cultural intelligence, lexical priming, and the ‘world Englishes’, whilst the second keynote dealt with compilation of dictionaries as a long-term project. ‘At the next conference I shall hopefully be able to present a paper on a topic related to isiZulu lexicography.’

The Department was also represented at the 20th International Congress of Linguists, likewise held in Cape Town.  Prof. Danie Prinsloo and Prof. Elsabé Taljard co-authored and read two papers: Reconsidering the lexicographic venue of specialized terms with specific reference to the African languages, and Intuition-based to corpus-based lexicons. At the same conference, Prof. Elsabé Taljard also read a joint paper with Prof. Nerina Bosman from the Department of Afrikaans at UP, with the title Corpus-based methods in metaphor research: challenges and techniques for lesser-resourced languages. In their paper, they compared conceptual metaphors and metonymies related to ‘blood’ in Afrikaans and in Northern Sotho.

The two papers read at two different conferences by Dr Sponono Mahlangu reflect her involvement in lexicography. She is Editor-in-chief and Head of the IsiNdebele Dictionary Unit housed in the Department of African Languages, and also lectures IsiNdebele modules. She first travelled to Krabi in Thailand for the 12th International Conference of the Asian Association for Lexicography (Asialex, 5–12 June). The theme of this conference was ‘Lexicography in the digital world’, and her paper was entitled Does the isiNdebele terminology developed today have any significant impact? The second conference and paper were already mentioned earlier – The inconsistencies found in terminology: A case in isiNdebele, read at the 23rd International Afrilex Conference (26–29 June).

Ms Renée Marais taught the Dutch language acquisition course at the ‘SAVN wintercursus’ (1–7 July), an annual ‘winter school’ sponsored by the Nederlandse Taalunie (Dutch Language Union). Twenty-three students of Dutch from nine universities in South Africa and Namibia were selected to attend. The other lecturer was Dr Johan Sonnenschein from the Université de Liège (Belgium), who taught Dutch literature. The event was hosted by the University of Fort Hare and organised by Mr Dewald Koen. The attendees braved the cold, worked hard, forged new friendships and made wonderful memories. (See https://www.litnet.co.za/suider-afrikaanse-vereniging-vir-neerlandistiek-se-winterskool-2018/) 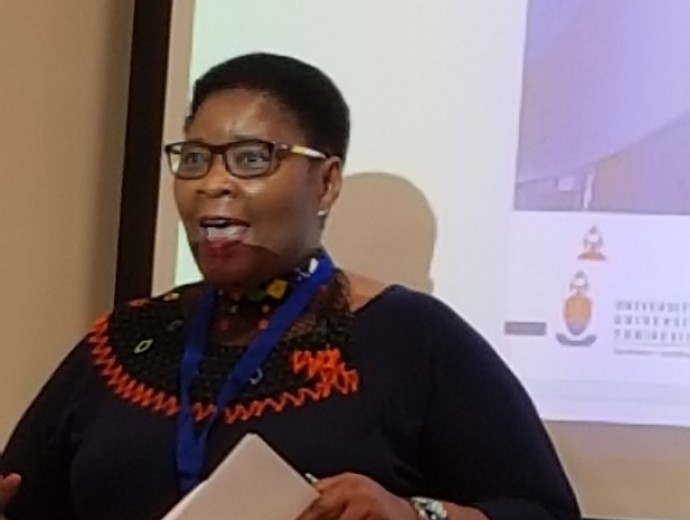 Mpume Zondi during her presentation