From 22 May to 14 June 2017, the Department of African Languages is host to a group of students from Michigan State University (MSU), accompanied by Dr Joy Coates, Director of African American and African Studies at MSU. Thanks to Ms Penelope Mdluli's excellent co-ordination, the visit commenced with a campus tour by isiZulu lecturer Ms Lungile Mncwango. Upon their return, the students were beaming with excitement, one student boasting how she had 'made friends with a few local students within [that] short space of time'. The group had requested a number of isiZulu lessons during their stay. However, as a department, the participating staff wanted to give them a taste of the diversity of languages on offer. Thus, the next day, staff members showcased their areas of expertise by giving four brief presentations. Prof Elsabé Taljard spoke about the 11 official languages of South Africa. Focusing on Sepedi, she introduced students to simple greeting formulae, which they enthusiastically practised. Next, Dr Sponono Mahlangu emphasized the pioneering role the University of Pretoria played in putting isiNdebele on the map as the first university to introduce it as an academic course. Dressed in colourful Ndebele attire, she emphasised the symbolic meaning of the dress code in the life cycle of the Ndebele woman. Dr Refilwe Ramagoshi highlighted the relationship that exists among the indigenous African languages. Involving other colleagues, she entertained students through song and dance. Ms Renée Marais spoke about the postgraduate training of language practitioners. She explained the distinction between translating and interpreting, emphasising the importance of being an expert in both language and culture. Her humorous examples of instances (especially in interpreting) that require profound culture-sensitivity elicited much laughter. To conclude the day's events, the Dean of the Faculty of Humanities, Prof Vasu Reddy, gave a welcoming speech that went straight to the hearts of the students. They felt very important when he elaborated on each student's individual research profile, suggesting how and where in the faculty each could find support. The proceedings were concluded with a meal that was shared in the Department. Dr Coates and Ms Tando Songwevu, Heritage Ambassador for South Africa who introduced the project, expressed their gratitude for the warm welcome they had received. In the words of Dr Coates, 'we are touched by the spirit of Ubuntu we have experienced since our arrival'. In response to their request, students will, during the remaining weeks, have introductory lessons in isiZulu and classes in some Zulu cultural aspects. They will also have a lecture on gender as it impacts on the lives of African women. The Department trusts that by the time they go back to the US its staff and students will have left an indelible mark on their lives, and hope that ongoing official collaborations will be forged.

The Department thanks everyone in the Faculty for the support pledged to our guests. Siyabonga. Ningadinwa nangomuso! (Never get tired of doing the same in future!) 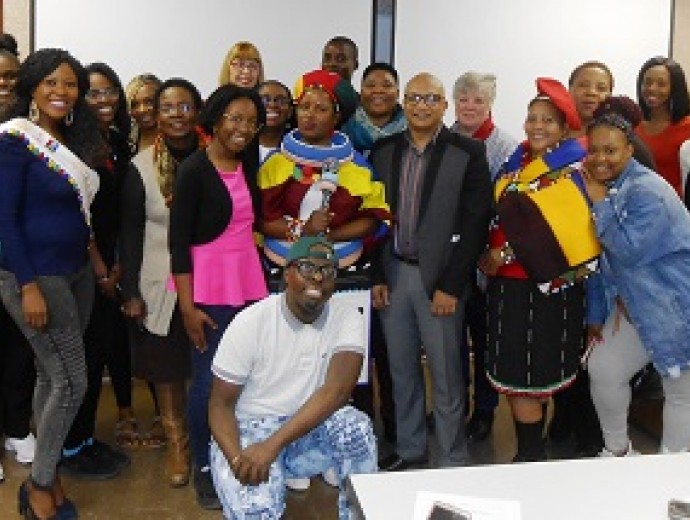