Ms Sedzani Siaga, a senior lecturer in the Department of Accounting at the University of Pretoria (UP), was awarded a Silver Angel Award at the annual G200 Youth Forum, which was held in Germany in April this year.

The 2016 G200 Youth Forum was organised by the Swiss-based G200 Association, who annually selects between 150 and 200 of the best students and young experts in the field of international relations, economics, finance and law, who are eligible to become young heads of state or ministers in the national youth delegations to the G200 Youth Summit. The selected young leaders, students and academics, along with representatives of the business world and governments from across the globe participated in this year's Forum, which was one of the largest international events organised by the Association to date.

The G200 Association, of which Ms Siaga is an executive member, is an international NGO that   brings its alumni together to foster professional development by organising international alumni meetings, G200 Youth Forums and other events. Through these events, the Association endeavours to create a platform for interaction and to facilitate cooperation on a wide range of day-to-day issues. The overall aim is to represent the independent views and opinions of a new generation of young leaders in resolving the most pressing economic and social problems in the world.  The Association counts young leaders from around 200 countries, who are successfully building their careers in various organisations in both the public and the private sectors, among its membership.

Each year the G200 Association recognises distinguished achievements in various societal spheres, including finance, family, health, family and community matters and the arts, with its prestigious Silver Angel Awards. Nominees must have 'made a difference' by inspiring positive action within a local community, society or the world at large. This year's awards were made at the opening ceremony of the 2016 Youth Forum, which took the form of an elegant gala event in Garmisch-Partenkirchen, Germany, where Ms Siaga also acted as the master of ceremonies.

Ms Siaga says that receiving the award came as a great surprise, as she is involved with the activities of the Association on an executive level and in this capacity usually has access to all of the information regarding the nominees. 'I still wonder how an entire Exco and a staff complement of ten people managed to keep this away from me, considering I had access to everything,' she laughs.

Ms Siaga received the award for her contribution to the development of global young leaders. Her receiving this award attests to her dedication to living a life of service, as illustrated by her role as full-time lecturer and the hours spent organising and managing a conference of such magnitude all the way from Africa. In addition, Ms Siaga is involved in various local initiatives such as volunteering at the South African Institute of Chartered Accountants (SAICA) and the South African Institute of Professional Accountants (SAIPA). 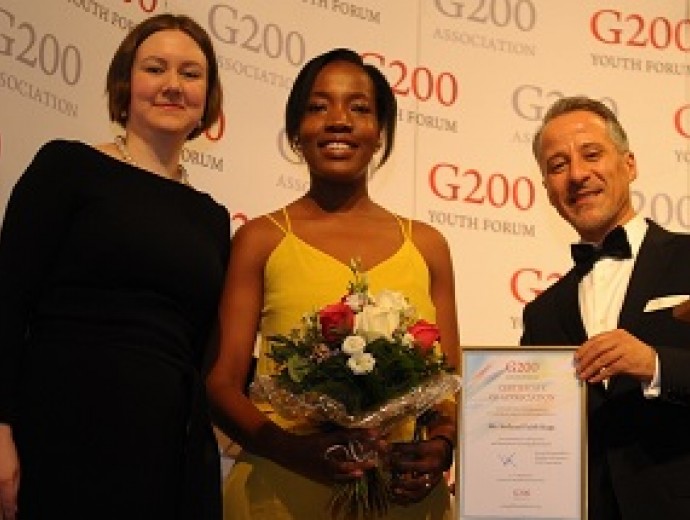