The fact that Azile claimed the fourth position out of 2 561 students who wrote the national ITC exam bears testimony to her diligence, hard work and inquiring mind. She achieved distinctions for both her BCom and her BComHons in Accounting Sciences and was awarded subject prizes for best performance in Financial Accounting and Auditing at honours level in 2015. She received her honours degree on Thursday, 21 April 2016.

Azile grew up in Madadeni, a town in the Amajuba District in KwaZulu-Natal and completed her schooling at Ferrum High School in Newcastle, also in that province. Her love for accounting only developed during her later years at high school. 'As I grew up, I discovered more and more that it really an area of interest and realised that I could get better and better at it.'

Azile admits that her progress was not always easy and that challenges and failures were unavoidable, but says that it is through failure that one learns the most. 'I also failed tests and it was perfectly okay as each failure was another opportunity to learn,' she said, and added that if you want to succeed, you have to apply yourself and believe that you can achieve great things. She is motivated and determined to excel and appreciates the support she receives from her family and friends, and from her mentor, Gottfried Rautenbach, who have all played a vital role in her success to date.

Her advice to other students who would like to pursue a career in accounting, or in any other field for that matter, is to ask questions, to be curious, to be bold enough to dream and set goals, and to develop plans and strategies to achieve them. 'With the right attitude and focus, no goal is too big,' she concluded.

The Zulu verb thuthuka, which means 'to develop', was chosen by SAICA as the name for its transformation initiatives aimed at increasing the number of African and Coloured chartered accountants. This transformation programme was established by the Department of Accounting to better serve the knowledge and skills needs of South African businesses by taking cognisance of the recognised need to transform the demographics of the accountancy profession. The Thuthuka Programme has been running at UP for 10 years and a celebratory function for all UP Thuthuka graduates and their guests was held at the Adler Restaurant on the Hatfield Campus after the graduation ceremony. 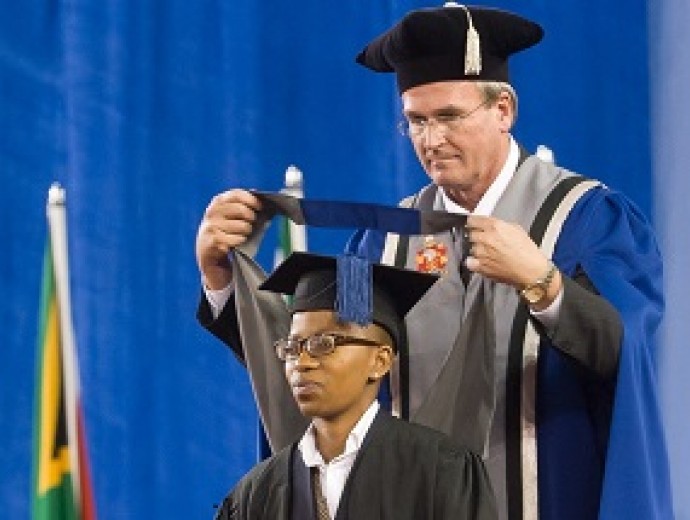