During this year’s Spring Graduation, Prof David Medalie had the rare honour (particularly in the Faculty of Humanities) of having four of his students receive their doctoral degrees. Three of the degrees were awarded in English literature and one was awarded in Creative Writing.

“Dr Zerbst is the first person to be awarded a PhD in Creative Writing since the Unit for Creative Writing was relaunched in 2017 with me as the director,” Prof Medalie says. “I am excited about her achievement and about the boost which her success has given to the study of Creative Writing at UP.”

Dr Zerbst’s thesis focussed on representations of predators and predation in South African poetry. This falls in the field of animal geography, ecopoetics and ecocriticism, and zoopoetics. She looked at how predators have been represented in both historical documents and English-language poems written during the past three centuries. Her study makes an important and unique contribution to critical discussions about representation and animal geography in the context of South African English-language poetry.

Dr Albert Myburgh’s PhD was co-supervised by Dr Idette Noomé. His work focussed on death and related motifs in nineteenth-century British Gothic texts. The study showed that these narratives draw on death to interrogate older and newer ways of knowing life and death. The thesis showed how the novels use death to explore how people live, die and exist beyond death.

Dr Adam Levin explored different approaches to representing historical trauma in literature through a comparative analysis between the work of Holocaust survivor and writer Elie Wiesel and literature on South Africa’s Truth and Reconciliation Commission. The study suggested that, in representing historical trauma, the South African literary works draw on the conventions of the Holocaust literary works, focusing on the psychological experience of the witness’s trauma.

Dr Antony Goedhals’ research looked at the neglected Buddhism in the works of Victorian writer Lafcadio Hearn. His study demonstrated the centrality of Buddhism in Hearn’s oeuvre, as well as the origin of the discourses that make up such notions of karma, reincarnation and the interrelatedness of all phenomena, namely oneness. “I am extraordinarily proud of all my students,” Prof Medalie says. “Their studies cover a wide range of literary, historical and philosophical topics, and I believe I learned more from them than they did from me. I feel privileged to have undertaken this enriching intellectual journey with them.” 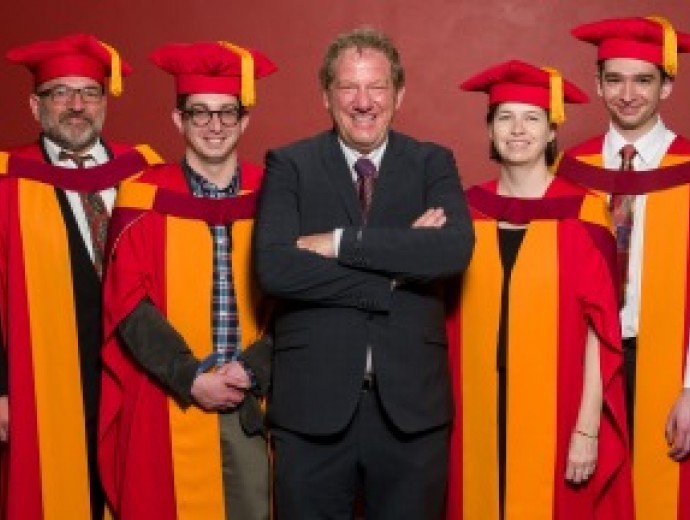