It is the second time this season that Sullwald has managed to get a top ten finish in the World Series. He was ninth at the Gold Coast-race.

The good thing for Sullwald is that he has moved up to 21st on the World Series-rankings, an improvement of 16 positions. Richard Murray ranked third is the top South African triathlete in the Series with Henri Schoeman, last year’s bronze medallist at the Olympic Games, ranked twelfth.

Sullwald was quite “chuffed” with how his race played out in Stockholm especially considering that he missed quite a few weeks of racing due to illness. He minced no words in describing how felt about his effort. Stopping short of swearing he described it as quite a hard race.

“Everybody was racing flat from the start with nobody willing to relent,” said the Tuks/HPC-athlete.

According to Sullwald the biggest mistakes he made was missing throwing his swimming goggles in the allotted box during the transition. It meant that he had to turn around to pick it up. In doing, so he missed the chase pack in the cycle leg.

“In hindsight, I should have left the goggles just where it felt, and raced off. It would have meant that I would have been penalised by 15 seconds at the start of my run, but  I would have gained at least 40 seconds racing on the bike.  Standing in the penalty box could have been a blessing in disguise as I could have done with a short breather before resuming my race. “

“I could see he was a little rusty, but that is to be understood. It is one thing to train and something completely different to race.

“The highlight for me was his run. For the first 4.5 kilometres, he was racing shoulder to shoulder with the race leaders. When he realised that he might be burning off his energy too fast, he settled running at a more comfortable pace.

“I was impressed with Wian’s never say die attitude over the last two kilometres. He had slipped back to the 11th  position, but there was no way that he was going to give up. He dug deep and somehow found the energy for one last surge to get back into the top ten. That excited me because I now know that when he is racing fit, he can fight for the win.”
Sullwald will race next Sunday in the Czech Republic again before returning home. 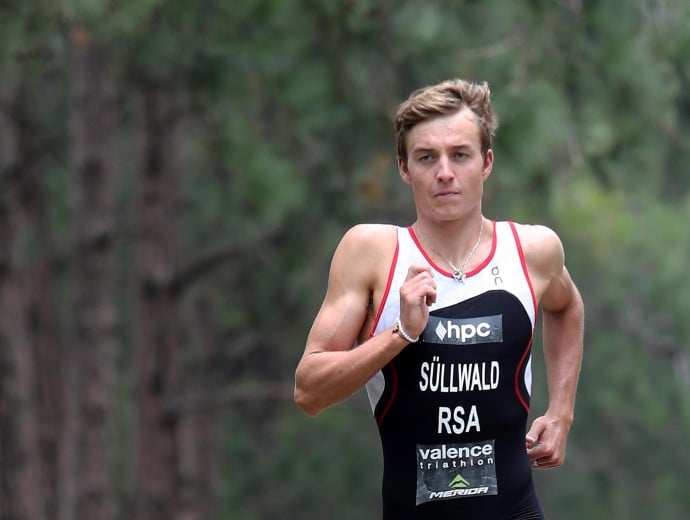