#TuksTriathlon: SA Triathletes Race to a 1-2-3 finish at the Cape Town World Cup

Something exciting is starting to happen in South African triathlon. One just needs to look at the results from Saturday’s Discovery World Cup sprint event which took place in Cape Town to realize that.

Richard Murray won the 750m swim, 20km cycle and 5km run in 51 minutes and 33 seconds while Henri Schoeman came second in 51:41 and Wian Sullwald third in 51:56. The three South Africans were separated by a mere 24 seconds.

Murray and Schoeman’s performances were not a surprise as they had already established themselves amongst the world’s best last year. It was Sullwald’s performance that brings much excitement. The former junior world champion proved that when he is 100% fit he can keep up with the best. Watch the space this is not going to be the TuksTriathlon athlete’s last podium finish this season, who knows maybe the three triathlon “musketeers” might just race to another 1-2-3 finish.

Even Murray commented about Saturday’s result saying:  “Finishing 1-2-3 is quite a statement. Wian taking third made it a better day.”

“Chuffed,” is how Sullwald described how he felt afterwards and he had enough reason to be excited. The last two years he had a string of bad luck. The worst was when he contracted tick bite fever which really wreaked havoc with his immune system. It meant that he was never 100% fit to compete. To add to his frustration he also had to overcome a knee-injury as well as a few other untimely setbacks. However quiting was never going to be an option for the TuksTriathlon athlete.

“I always knew that if I can stay injury for more than three months and put in the hard work that I would be capable of racing the best and even beat them.”

Sullwald admits that his performance in Cape Town was not perfect.

“I messed up a bit during both transitions which made me lose valuable seconds. My coach Lindsey Parry (Tuks/HPC) will definitely advise on it. I allowed myself to get boxed in during the cycle leg which was a mistake on my end.  But I kept a cool head and worked my way back.
“I was quite comfortable on the run passing one athlete after another until I moved up into third place. I then just settled into running a nice consistent pace. The reason for this is that I have not really started to do any speed work on the track and therefore did not want to risk overdoing it on the run. For now I am more than happy with a third place finish.

“My next race is the Abu Dhabi World Series by then I will definitely be stronger on the run.”

According to Sullwald he has set himself definite goals this season and he is not going to quit until he has achieved them.

As for Sullwald, the former world junior champion was still seeking consistency. ‘I messed up both my transitions, but I kept a cool head and worked my way back. On the bike I managed to get away a bit but was then boxed in on T2 and then slipped on the way out.
‘It’s good to be back in the mix and keeping a cool head.’ 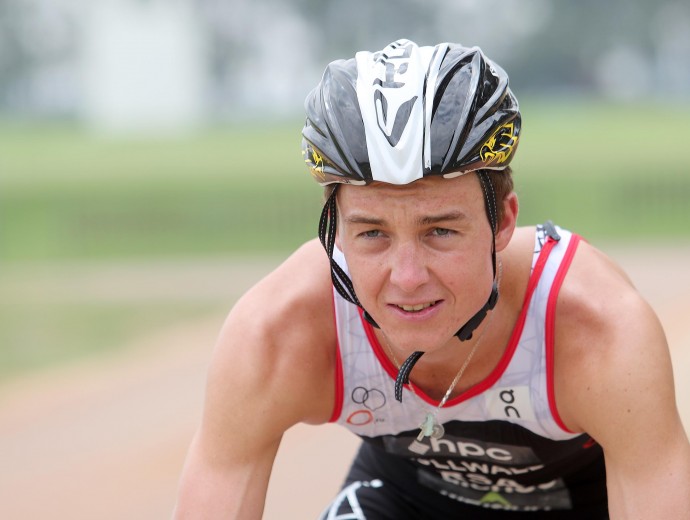