#TuksRowing: Luc Daffarn is confident of qualifying for the men’s coxless pair final in Tokyo 2020 Olympics

“The A-final at the Tokyo Olympic Games.”

Luc Daffarn makes this prediction with so much conviction that it is hard to doubt him. He and Jake Green will team up to row in the men's pair race on Saturday, 24 July.

"We have the boat speed to make it happen. We just need to go and put our best foot forward and race to the best of our ability," says Daffarn.

"It is said that a good crew should be able to 'dance' themselves and their boat across that surface of the water. When it happens, it is 'amazing'. In the 11 years that I had been rowing, I have experienced it only a handful of times. Every moment of it was memorable. Hopefully, it is going to happen in Tokyo."

Daffarn considers the Croatians (Martin and Valent Sinkovic) who won the gold medal during the 2019 World Rowing Championships as the pre-race favourites. This season they also won two of the three World Cup races.

"But then again, I think the Covid Pandemic has levelled the playing field. Most of us did not get to race as much as we would have liked over the past two years. It means there is a lot of uncertainty. Nobody is sure of what the other crews are capable of at the moment," the Tuks based rower explained.

"We do have an extremely calculated race plan, almost like a quarterback's playbook in American Football. Not quite hail mary and' balls to the wall' but very close."

When asked how things work during the race, Daffarn said that Green sits in the back and is responsible for setting up the stroke rate and rhythm.

"I am the communicator and strategist, making sure we stick to the 'playbook'. I also have to keep up with Jakes stroke rate," the Tuks based rower explains.

"The pairs are unique in that there are only two of us each controlling one side of the boat. Thus, from an 'engine room' perspective, we need to be perfectly synced in the amount of power and delivery."

Rowers compete for 2000 metres. In men's pairs racing, it boils down to just less than seven minutes of truly strenuous rowing.

"There is a saying amongst rowers regarding a '2km-race'.’It never gets any easier. You just go faster.' This could not be closer to the truth.

"Racing a flat box two thousand meter race, I'd go as far to say, is probably the most challenging thing that one can do in the sporting world for its length of time. The pain gets so overwhelming that your body is screaming. Everything is hurting. Still, only one thing matters. That is to execute your technique to perfection. That is why we trained for hours on end." 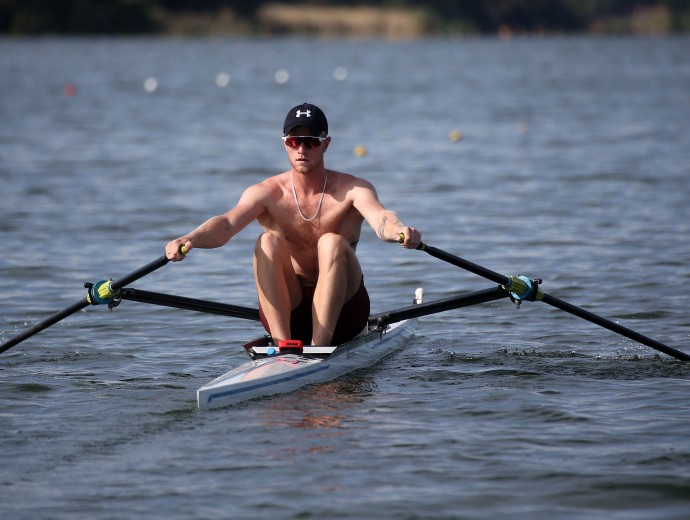