#TuksSport: Q&A with Mpumi Geza at TuksRowing and why he loves the colour of gold & winning

Four years later in 2018, Geza was crowned as Coach of the Year in the individual sports category at the TuksSport Colours & Awards.

1. Tell us, what does your day as a rowing coach look like? What do you get up to?

It varies from day to day, but typically at 7:30 am, we are at the TuksRowing Ergo Room/TuksRowing Shed.

2. Before you joined TuksSport, what were you involved in?

Before I joined TuksSport in 2014, I was a head rowing coach at the Holy Rosary School for Girls in Johannesburg, where I was also active as a junior national assistant coach for two years and a South African schools development coach for three years.

3. What have been your best highlights as a coach in the past few years?

Almost every year at Tuks has been a highlight, we have grown from strength to strength as a club reaching the very top of the senior club scene but if I have to narrow it down to a few specific ones it would have to be Student World Championships in Shanghai 2018. We won two bronze medals with Tuks rowers in the lightweight 2x (Ryan Delaney and Chris Mittendorf) and the heavyweight 2x (Bradley Betts and Mzwandile Sotsaka) that year was a testament to the quality TuksRowing is producing.

Then the multiple titles in 2019, we had a clean sweep of all our major regattas:

This year we were on track to do it again but the current pandemic got in the way of that with two Championships under the belt in VLC Sprints & Buffalo Regatta 2020.

4. You once said, "I love the colour of gold, and I love to win”. What inspired you to say those words?

Inspired mostly by senior lightweight 4- (Sizwe Ndlovu, John Smith, Matthew Brittain & James Thompson) that won gold at the London Olympics in 2012, they put us on the map and inspired us to believe that winning gold is possible. And, that it can be done from right here in Pretoria.

That culture and mentality are what Roger Barrow (national rowing head coach) drives with his team and I have been fortunate to spent time with him and the national team, learning and instilling that same culture and belief into the TuksRowing Club over the years.

He is the major influence and he is the inspiration for that gold medal hunt.

5. In 2018, you were crowned as Coach of the Year for individual sports at the TuksSport Colours & Awards, how did it feel winning the award?

It is unbelievable to think that has happened but it is an incredible feeling because I know the level and quality of my peers and colleagues here at TuksSport. So to reach the top and receive that award is something special to me and I will cherish that achievement for life and try to push for another one day.

6. Are you still a member of the USSA Rowing and sub-elite national setup? If yes, what excites you the most about being part of the framework? If no, what have you learned so far?

At the moment I am not, I chose to step down to focus on the TuksRowing Club and my coaching development.

What I have learned from the whole exercise is that South African Universities have an immense amount of talent in its structures which is exciting for our sport. The challenge for the coaches and Universities is to try to bring the quality up to the world standard so we can really make our mark in all aspects of the international scene. It is difficult to juggle the TuksRowing Club and the extra workload of the sub-elite program at once. Tuks is the priority for me right now, perhaps when I am settled here and have achieved my goals and targets with the club, I will make my way back into that sub-elite structures and contribute more positively to it.

7. What are your words of encouragement to high school rowers especially those who would be joining the TuksRowing Club next year?

The young bucks always roll in here with stars in their eyes and big ambitions which is good but they need to understand it takes time to become a champion, invest the time into settling into varsity and build yourself UP. Tuks has all the tools to get you there you just need patience, persistence, and belief it will happen. 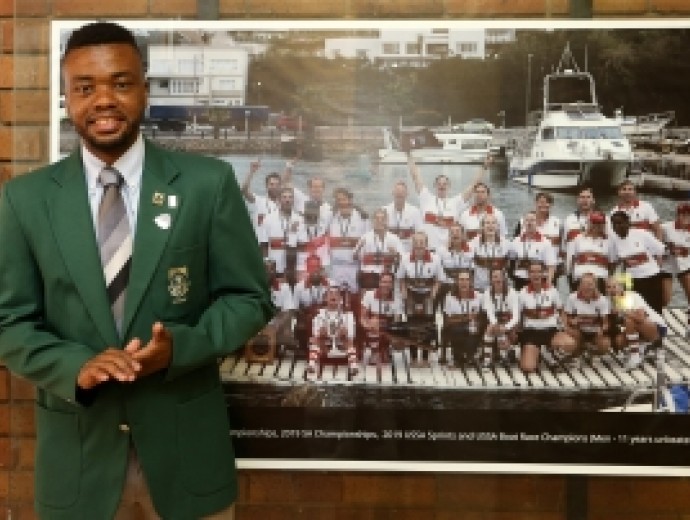