The absolute hunger to be the best led to the Tuks rowers setting four firsts during the USSA Boat Race Regatta in Port Alfred.

Saturday's highlight was, without a doubt, the performance of the men's A-crew. They won which means they are now unbeaten in 11 consecutive races. It is a new USSA-record.

Rhodes is the only other university crew who has been able to notch up double-winning figures.  In the past, they managed to win ten races on the trot.

The Tuks men's crew certainly had to keep their wits about them as they did not have the best of the starts. They had to come back for a restart on two occasions. The Tuks boat crashed twice into the UCT crew. There was no mal intent.

"At the start, there was an incoming current which made it difficult for our coxswain to keep a straight line. That is why there was a crash," explained Mpumi Geza (Tuks coach).

Tuks was, however, still penalised. After the first crash, they had to start a boat length behind UCT, which was increased to two after the second crash. It meant that UCT had about a 37 second lead for a short while, but once the Tuks crew got "stroking" there was no stopping them.

A chuffed Geza said he never doubted the outcome.

"During training, I made sure that all the crews were prepared for the unexpected happening at any moment. So when the crash happened, no one was fazed. The rowers were still focussed on what mattered. That was to execute each stroke to perfection."

An extraordinary statistic is that there was a Brittain brother involved in each of Tuks's 11  victories. Matthew Brittain (a former Olympic gold medallist) was the first to help Tuks win. Lawrence Brittain (a former Olympic silver medallist) took over from him. In 2016 there were three Brittain brothers (Lawrence, James and Charles) in the boat. Charles (a gold medallist at the Under-23 World Championships captained the crew on Saturday.

Geza can't but help to praise the Brittain brothers.

"I never worked with Matthew. I can, however, say working with Lawrence, James and Charles is any coach's dream as they are the ultimate professionals. It often happens that I get to bounce ideas off them as to how to get the boat to be faster," explains Geza who started coaching at Tuks in 2014.

If Geza has his way, Tuks will continue their dominance during the USSA Boat Race Regatta for a while still.

"I love the colour of gold, and I love to win. That is what motivates me every morning when I get up. Being at Tuks adds to my motivation as there is such a proud rowing tradition. The challenge is to keep on doing what we do to continue building a legacy."

The Tuks women's A crew won for a fourth consecutive time which is another first. The men's B and women's B were also victorious, ensuring a third first. No university has ever managed to win all four races. Tuks is also the overall USSA rowing champions. 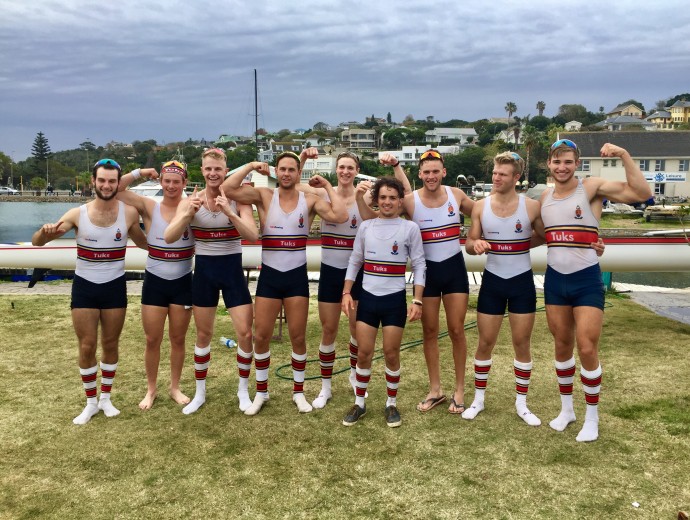