South Africa’s rowers gave a good account of themselves over the past weekend during the Memorial Paulo D’Aloju in Piediluco, Italy winning two races as well as being second in four races and third in another.
The South African rowing coach, Roger Barrow, who at times can be a hard man to please, was satisfied with what he had witnessed.
“The weekend’s racing gave me a lot clearer answers as to the standard of the crews we got. I was impressed by the performance of John Smith and Lawrence Brittain in the men’s pairs as well as the men’s fours.”
Smith and Brittain (Tuks) raced to a second place finish in the men’s pairs on the first day. On Sunday they teamed up with David Hunt and Jake Green (also based at Tuks) to win the men’s fours.
It was quite an impressive display as at the 1000 metre marker they were in the second place, nearly two seconds behind the Italian crew. Slowly, stroke by stroke, they started to catch up securing the victory by mere centimetres. The South Africans won in 6:09.65 with the Italians second in 6:09.92.
Smith is, for now, satisfied with the way they performed.
“We were not quite at our best during the men’s fours heats as we decided to change boats because we were not feeling comfortable. It led to us only finishing fourth. In light of this, the pressure was really on, but it seemed as if the stars aligned for us as we had a ‘cracker’ in the final beating a good crew.
“Lawrence and I had a great race during the men’s pair heat losing out to the Romanians by only 1.63 seconds. Unfortunately, we were terrible during the final which enabled them to beat us the second time around by more than five seconds.
“We now realise that the Romanians are very quick.  It seems they are at the top of their game. I am sure they will surprise quite a few crews during the first World Cup. However, we know now what the standard is of what we need to do to catch up to. I am looking forward to the challenge.”
Barrow was also satisfied with how Hunt and Green combined with Sandro Torrente and Kyle Schoonbee on the first day in the men’s fours. They finished third. What excited Barrow was the way they were prepared to duel it out with the crews of Italy and Romania right to the end. The three boats were separated by a mere two seconds.
Romania won in 6:10.06. Italy was second in 6:11.13 and South Africa third in 6:11.40.
Barrow decided to test two lightweight double scull women’s combinations over the weekend. On the first day, Kirsten McCann and Nicole van Wyk (Tuks) teamed up and finished second to the Romanian world champion crew, Ionela Cozmiuc and Gianina Beleaga. The time gap between them was a mere 0.83s. Ursula Grobler won the lightweight single sculls.
On Sunday McCann and Grobler also lost out to the Romanians while Van Wyk finished second in the single sculls.
Barrow made it clear that he is still undecided as to which is the fastest combination.
“Obviously, the common denominator is Kirsten who did an excellent job stroking the boat and improved with each race.”
- Author Wilhelm de Swardt
Share this page
Published by Leonore Jordaan 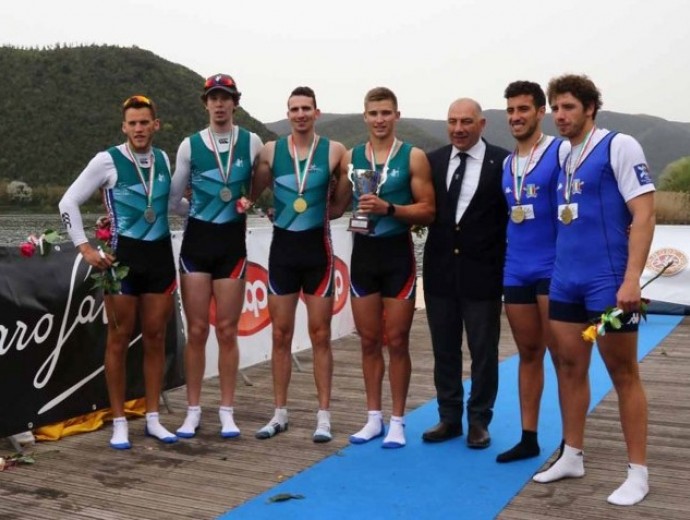