#TuksRowing: SA rowers to start their international campaign in Italy over the weekend

South Africa’s top rowers will start their campaign trying to qualify for next year’s Olympic Games in Tokyo over the weekend when they are competing at the Memorial Paulo D’Aloju in Piediluco, Italy.
As it is their first international outing Roger Barrow (South African national rowing coach) is not making bold predictions. He views it more as “stock-taking” to see what the rowers are capable off when competing internationally. That is why he intends playing around with different crew combinations over the two days.
On Saturday Lawrence Brittain and John Smith (TuksRowing) will be competing in the men’s pairs while Jake Green, David Hunt, Sandro Torrente and Kyle Schoonbee are in the fours. On Sunday Torrente and Schoonbee (TuksRowing) will be rowing as a pairs crew with
Brittain and Smith going over to the fours boat.
Last year the Tuks rowers dominated with Schoonbee, Hunt, Smith and Torrente winning the fours race. Smith and Torrente were also victorious in the men's pairs.
Brittain suffered a slight setback during the national training squad’s recent training camp in Lesotho. He tore his ankle ligaments during a mountain biking accident. But being tough as nails he is not going to allow such a setback to stop him from competing.
“What makes Lawrence a world-class rower is his mental strength and his capacity to adapt to any situation. So I don’t foresee Lawrence being slowed down at all by his injury,” explains Barrow.
He is also impressed with how Smith a former lightweight Olympic gold medallist has adapted to competing in the heavier category. According to him Smith worked really hard to improve on his weaknesses. Especially when it comes to power output.
There will also be switching of positions as far as the women are concerned.  Nicole van Wyk (Tuks) and Ursula Grobler will each get a chance to row with Kirsten McCann (a former lightweight single sculls world champion).
McCann has got a proud record at the regatta having never been beaten competing in the lightweight double sculls category. Last year she and Van Wyk won gold. The following day contesting as “heavyweights” they won silver.
The South Africans won’t have it quite their way this time around as last year’s Romanian lightweight double sculls world champions, Ionela-Livia Cozmiuc and Gianina-Elena Beleaga have indicated that they will also be competing. This excites Barrow.
Barrow said having Grobler back after a two-year absence is excellent as the rivalry between her and Van Wyk to be the one joining McCann in the doubles boat is making for faster times during training.
“Ursula has still got a lot of work to do to make up for the two years she lost, but she is certainly up to the challenge. It is difficult to say which of the two combinations are at the moment the fastest.”
The former bronze medallist at the Junior World Championships, Thabelo Masutha, will be competing in the men’s singles sculls. According to Barrow, the Tuks rower is physically capable of competing against the world’s best. However, he still needs to work on his mental strength.
“It should be remembered that rowing is a sport for the thirtysomethings, not 19-year olds,” Barrow joked.
- Author Wilhelm de Swardt
Share this page
Published by Leonore Jordaan 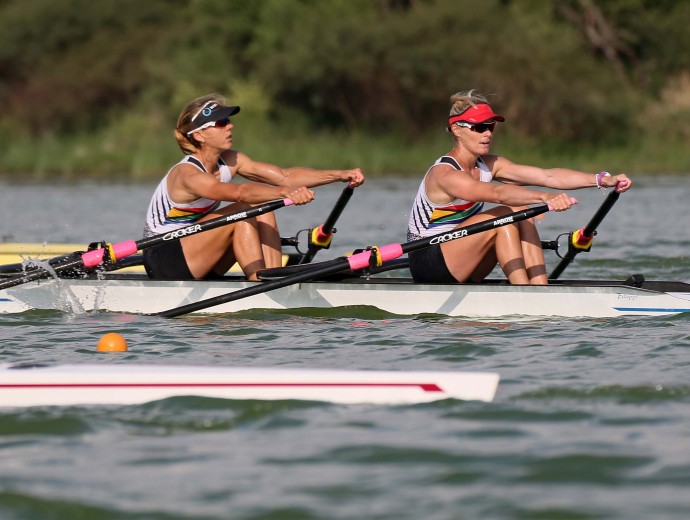