#TuksRowing: Mitchell and Brittain unavailable to row for SA at the Senior World Championships

The gold medallist at the World Under-23 Rowing Championships, James Mitchell (TuksRowing), decided not to make himself available for selection for next month’s senior world championships in Bulgaria due to study commitments.
His pairs partner at the championships, Charles Brittain (TuksRowing), also had to withdraw due to a knee injury he sustained during cycling.
This means that the 2016 Olympic silver medallist, Lawrence Brittain (Tuks), and the 2016 Olympic finalist, Jake Green (Tuks), could end up representing South African in the men’s pair during the World Championships (9-16 September).
Roger Barrow, national rowing coach, still got to make the final decision as to who is going to sit in which boat. He will probably select a men’s pairs crew and a men’s fours crew in the heavyweight category.
The next challenge Mitchell set himself is to help Tuks win the USSA Boat Race in September. Last year Tuks won it for the ninth consecutive time. One more victory will mean that they get to equal Rhodes University’s record of ten successive victories.
It is challenge Mitchell and his teammates relish as they believe that no goal is impossible. In the end, it boils down to the hunger to succeed and believe in being the best.
Mitchell who is studying BCom Law committed to rowing while he was at St Johns College. At first, his goal was not to really win races but to lose weight. Visualising Mitchell as fat is difficult as he is 2.02 metres tall and it easy to think that he might be a rugby player or even a fast bowler in cricket.  However, he insists that he used to be quite chubby.”
“I did play rugby. I started out as a prop, but I was never really that good as a rugby player. Mind you at first I was also not that good a rower, but I always enjoyed it more due to the camaraderie. Rowing in itself is such a unique sport. I can’t think of any other sport to compare it to.”
Winning a gold medal at the Under-23 World Championships will always be a special memory for Mitchell but it is a case of success begets success. He has already set his sights on trying to win another medal for South Africa at a World Championships or even better the Olympic Games. He does not care whether he gets to be in the pair's boat of the fours. All that matters is that he gets to compete.
According to Mitchell rowing can be at times quite emotionally draining.
“After qualifying for the final at the world championships, we had a day off. I was allowing myself to get stressed out unnecessary. Then I realised that this is exactly what Charles and I have been training and dreaming of. We did all the sacrifices and the hard work, and we deserved to be in the final.”
- Author Wilhelm de Swardt
Share this page
Published by Leonore Jordaan 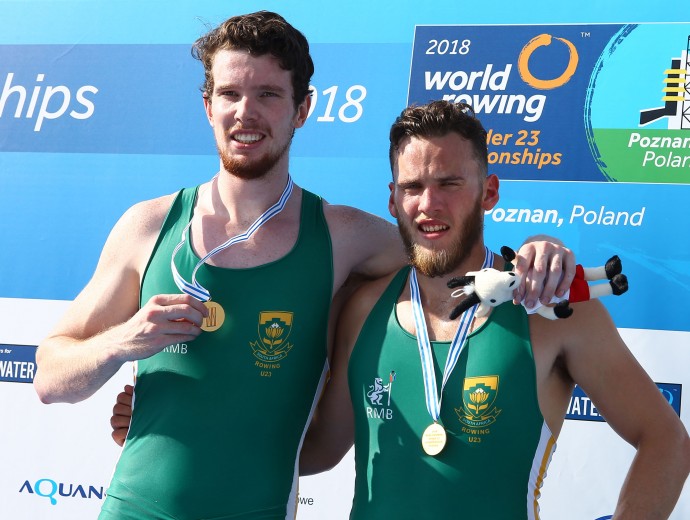