#TuksRowing: Brittain and Mitchell wins gold at the World Under-23 Rowing Championships

Charles Brittain and James Mitchell gave a masterclass display of what guts and determination should be about yesterday when they won the gold medal in the men’s pair race during the World Under-23 Rowing Championships in Poznan, Poland.
With 500 metres to go few would have tipped the Tuks based rowers to win as they were trailing the Romanian crew, Dumitru-Alexandru Ciobica and Florin-Sorin Lehaci by four seconds.
However, it quickly became clear that Brittain and Mitchell were hell-bent on snatching a victory from the proverbial jaws of defeat. With perfect teamwork combined with brute force, they started to close in stroke by stroke. Their determination led to them not only passing the Romanians but beating them by a second.
The South Africans stopped the clock at 6:41.74 with the Romanians finishing in 6:42.53. Italy’s Andrea Maestrale and Raffele Giulivo were third in 6:48.23.
“We stuck to the race plan, and we got into a perfect tempo for the first 1 500m. Over the last 500m, our only goal was to minimise the damage. Everything just clicked from then on, and that boat just got faster and faster. I must credit the Romanians for their aggressive approach,” said an elated Mitchell.
Lehaci agreed that it was an exciting race, saying that they started to take severe strain during the latter part of the race.
Winning the gold medal means that Brittain has taken the first step to emulating the performances of his elder brothers, Matthew and Lawrence. They are both Olympic medallists. Matthew was part of the “Awesome Foursome” that won gold at the 2012 Games in London while Lawrence teamed up with Shaun Keeling to win a silver medal at the 2016 Games in Rio.
Lawrence Brittain (Tuks) praised his younger brother and Mitchell for their heroic performance.
“It was an epic . . . epic race. I was really impressed to see how Charles and James were able to hold their composure throughout the race. The way they managed to do five seconds of damage over the last 500 metres was just awesome. It must have been pure guts. I think this is just the start for both of them. Charles and James are just going to get better.”
Brittain described his younger brother as a perfectionist.
“Charles is really hungry to be the best. Sometimes he can be hard on himself. In a way he is like Matthew, being ruthless on how things should be executed. Because the standards they set are quite high, it can be quite tricky to row with them as they tend to be unforgiving on mistakes. But then again that is what you want from a teammate. I am looking forward to row with Charles at some stage," said the Tuks rower.
- Author Wilhelm de Swardt
Published by Leonore Jordaan 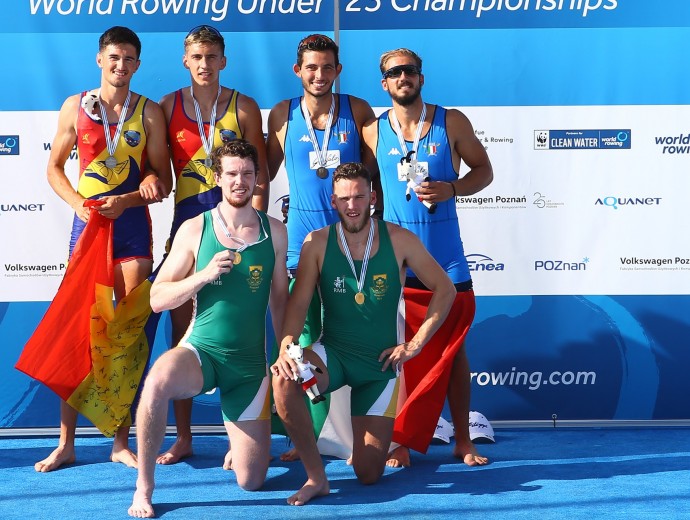