South Africa's men's four crew has a realistic chance to medal at the World Rowing Championships which start on Sunday in Sarasota, Florida.

They certainly got the credentials to do so. John Smith is former Olympic and World Championships gold medallist, Lawrence Brittain is an Olympic silver medallist while Jake Green and David Hunt were part of the crew that just missed out to win the bronze medal at last year's Olympic Games in Rio.

The South African crew only competed in one World Cup-race finishing fourth in Lucerne, missing out winning the bronze medal by 0.05s.

It is interesting to note the South Africans time of 5:54.77 is the fifth fastest recorded in the three World Cup fours finals. Only Australia, England, Italy and the Netherlands were able to set faster times.

England seems to be the inform crew. They won the Belgrade World Cup, were second in Poznan, Poland and won in Lucerne. The Australian crew won the second World Cup.

Brittain (Tuks/HPC) said their men's four crew is a process in the making.

"At the beginning of the season, we were four good individuals getting into a boat. The challenge was to become a proper crew who understand each other and who can get the boat to move quicker.

"It took a lot of long hard hours, but I think during the Lucerne World Cup we started to gel. I believe we are now one crew with one goal.

"The World Championships is going to be a humdinger. It is quite windy on the course but not as bad as it was during the Rio Olympic Games.

"I think we will get a good idea of how we compare to the other crews after Sunday's heats."

The Tuks/HPC rower tips Australia and England as the crews to watch. He is of the opinion that the Brits will even be faster than they were during the World Cup-races.

"Italy, Netherlands and Spain are the other teams who are definite medal contenders, but I rate our crew also. Since Lucerne, we managed to get the boat to be a lot faster. "

Asked to describe how their crew works Brittain said: "Jake will make sure no one takes an inch from us without paying for it. We trust him to hold a killer rhythm.

"John's medal record at the World Championships and the Olympic Games speak for itself.

"I take up the second seat in the boat which is the slave seat. My role is to support the front two with quality rhythm, be technically on point and work like a dog, making sure no-one on the course is laying down more watts than me.

"David sits in the 'boot". His role is to call the race plan and adjust it down the track if needs be. He is the technician of the crew, bringing us together and making sure we are all working as one." 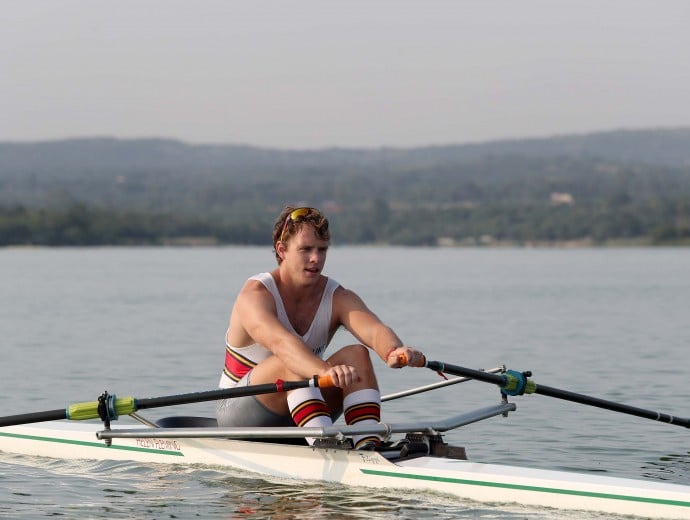