Nicole van Wyk will try and settle an old score from Wednesday on (19 July) when she competes at the World Under-23 Rowing Championships in Plovdiv, Bulgaria.

Last year as a relative unknown Van Wyk surprised many when she raced to a second place finish in the women’s lightweight single sculls at the Under-23 Championships. It is a year later, and the Tuks/HPC-rower makes no secret that she has higher aspirations, a typical case of what was good enough last year is not going to be good enough this time round.

There is a real chance of the final being a repeat of what happened last year. Marieke Keijser (Netherlands) won, beating the fast finishing Van Wyk. Both rowers are competing again.

Keijser is definitely in good form. At the recent World Cup in Lucerne, Switzerland, she finished second losing out by less than three seconds to South Africa’s Kirsten McCann.

Van Wyk considers this result as a good confidence booster as she and McCann are training partners and in a tough training race Van Wyk loses out by approximately the same margin.
However, the Tuks/HPC-rower is quick to point out that statistical speculation just makes for interesting conversation. The real race is going be to on the water where it is going to boil down to who wants it most.

“I am better prepared than last time. My goal was to get stronger and faster, and I think I have achieved that. If I should qualify for the final, the plan is not to play catch up again,” said Van Wyk.

The 2015 World Student Games in Korea turned out to be the turning point in her rowing career. She finished 3rd in the B-final of the lightweight women’s sculls.

“That result left me with two choices, I could let the failure get to me, or I could do something about it. I chose the latter.

“The failure motivated me to work harder. For the last two years, I have been on a daily quest to win seconds every time I row,” said the Tuks/HPC rower who in April won a gold medal at an international regatta in Italy.

The other South African crews who have a realistic chance to medal at the Under-23 Championships are Vaughn Botes and Nicholas Oberholzer (lightweight men’s double sculls). They finished fourth last year. Kyle Schoombee in the men’s single sculls can surprise. Luc Daffarn and Sandro Torrente (men’s pairs) should also be in the mix if they qualify for the final.

Christopher Mittendorf will compete in the lightweight men’s single sculls while Garth Holden, Mzwandile Sotsaka, Charles Brittain, and Timothy Miller will team up in the men’s fours. 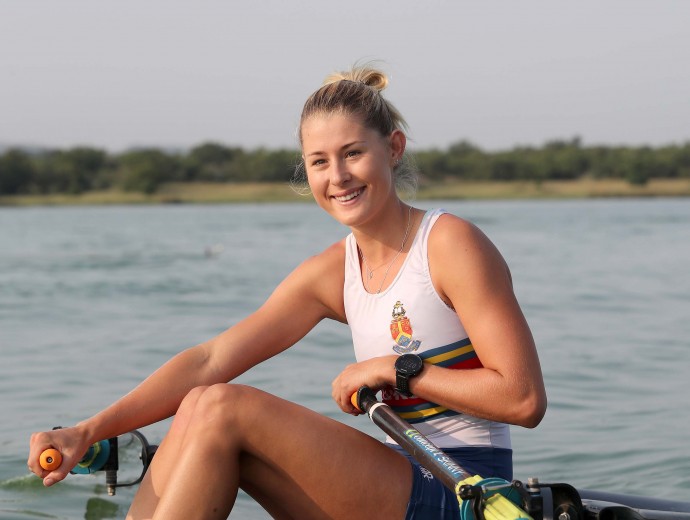