One of the biggest highlights in South African Olympic history was the lightweight fours rowing team winning a gold medal at the 2012 Olympic Games in London.

At the time, it was described as the greatest rowing finish the Olympics had ever seen. It was certainly a victory against all odds, proving to every South African athlete that, with the right mind-set, anything is possible. Because of their achievement, James Thompson, Matthew Brittain, John Smith and Lawrence Ndlovu were dubbed the Awesome Foursome.

The Tuks/hpc rowers' heroics have not been forgotten. On Friday, 28 April, they received the Order of Ikhamanga in Silver from President Jacob Zuma, the Grand Patron of the National Orders.

The National Orders are the highest awards that South Africa bestows, through the President of the Republic, upon citizens and members of the international community who have contributed meaningfully towards making the country a free, democratic and successful nation, united in its diversity.

The Awesome Foursome showed during the build-up to the 2012 Games that when the going gets tough, the tough get going. Over the four-year period, they trained every day, except perhaps a handful of Sundays. They were even on the water on Christmas Day.

'Each one of us believed that dedicated training wins races. Therefore, we made sure that we arrived at a training session with the same hunger that we would need on the day of the Olympic final,' Brittain says. 'It takes incredible commitment to push yourself to continue in spite of the pain, and to give your best with every stroke even when your body is begging you to stop. But if you want it badly enough, you find out that your body is capable of performing feats of excellence even under the harshest conditions.'

Brittain (Tuks/hpc) retired in 2013 due to a persistent back injury.

When Thompson says he does not believe in giving up, he means it. Many people might not know about the obstacles he had to overcome as a child to be able to achieve what he did. He was diagnosed with ADHD, dyslexia, reading and spelling problems, as well as motor skills disorders.

According to Thompson, his participation in sports, especially rowing, has helped him to cope with his disabilities.

'But at times my disabilities helped me to cope with my sporting challenges. That is why I often speak about the lessons I have learned through the process of winning and losing,' says Thompson, who recently completed a degree in sport sciences at the University of Pretoria.

Not one to rest on his laurels, Smith is already priming himself for the next challenge. He has never been afraid to take on big challenges and has decided to move up a weight category as part of his preparation for the 2020 Games in the Tokyo. Smith knows that a move from lightweight to heavyweight will pose a challenge. He will have to gain 20 kg and become much stronger. Since the Olympic Games in Rio, he has already gained 12 kg and aims at weighing 90 kg by 2020.

Ndlovu, also known as Seize, became the first black African male rower to win Olympic gold, overcoming injury and illness to become one of Africa's best rowers. Since winning the Olympic Gold, he has received many accolades. In February 2013 he was named Athlete of the Month by World Rowing, and he and his teammates won the Sports Team of the Year Award at the 2012 South African Sports Awards and the 2012 World Rowing Crew of the Year Award. 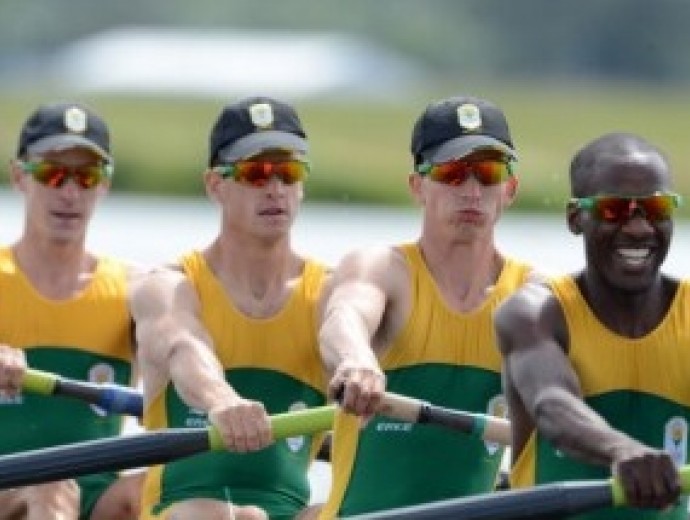 The Awesome Foursome in action