The four South African rowing crews who competed in the finals at the 2016 Olympic Games in Rio, will certainly agree that Friday was a day when nothing went according to plan.

In spite of high expectations, none of them were able to medal. From a South African perspective the saddest story of the day was certainly the men’s fours race.

Vince Breet, Jonty Smith, David Hunt and Jake Green (Tuks/hpc) were in third place for most of the race. With only 500 metres left it looked as if the bronze medal was theirs for the taking. Unfortunately they abruptly ran out of steam, enabling the Italian crew, Domenico Montrone, Matteo Castaldo, Matteo Lodo and Giuseppe Vicino, to pass them in the last 200 metres.  The South Africans had to settle for fourth place and it was the end of South Africa’s medal dreams.

The women’s pair was won by Britain’s Helen Glover and Heather Stanning in 7:18.29.  South Africa’s Lee-Ann Persse and Kate Christowitch were fifth in 7:28.50.

Matt Brittain, gold medallist rower in 2012 who trained with most of the rowers for years, said the average sports fan will not understand the disappointment his former teammates experienced today.

According to him, the fact that none of the four Tuks/hpc crews medalled was definitely not due to a lack of commitment.

“I can vouch for it that over the last four years they trained every day of the year except maybe for a handful of Sundays.  Even on Christmas they were on the water. If someone was sick he was replaced to make sure that the boat itself never missed a session.

“Every rower believed that dedicated training wins races.  Therefore they made sure that they arrived at a training session with the same hunger that they would need on the day of the Olympic final.

“The rowers knew the easiest way to rise to the occasion is to do exactly what you do every day, so it better be gold medal standard,” Brittain remembers.

“Training is not only huge in volume; it also takes an incredible commitment to push yourself to continue in spite of pain, and to give your best with every stroke even when your body is begging you to stop. Try to make your body do that two or three times a day, every day, for four years.

“But if you want it badly enough you find out that your body is capable of performing feats of unreal excellence even under the most inhuman conditions.  Sport can be cruel.  However, the reality of sport is that there can never be any guarantee of success, no matter how big the sacrifice. That is why I feel for each of the rowers,” said Brittain. 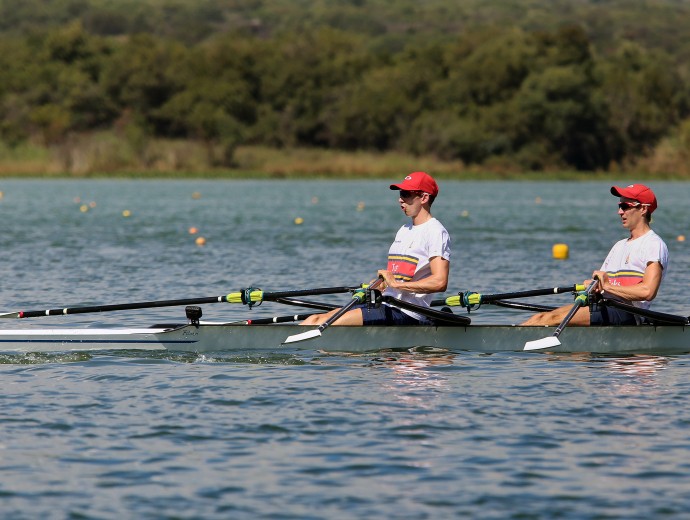