When Kirsten McCann and Ursula Grobler compete in the heats of the women's lightweight double sculls at the Olympic Games in Rio on Sunday afternoon, their mission will be to defend the honour of South African female athletes.

In reality, they represent one of possibly only three realistic chances for South African women's athletes to win at the Games. According to the pundits, Sunette Viljoen (javelin) and Caster Semenya (800 metres) are the only other South African women who have the ability to contest for a medal.

With their never-say-die philosophy, it is not surprising that McCann and Grobler have made rowing one of only a few sporting codes in which South African women are able to hold their own against the world's best.

At the World Championships last year, they made South African sporting history when they won a bronze medal. This was the first medal ever won by South African female rowers at a major event.

With their performances at the two World Cup regattas in which they competed, the Tuks/hpc crew proved that they are in good form. In Italy, they won a bronze medal and in Switzerland a silver.

New Zealand's Sophie Mackenzie and Julia Edward have had a successful Olympic cycle, winning two World Championship titles in 2014 and 2015. This season, however, they only managed to win bronze at both World Cups in which they competed.

Canada's Lindsay Jennerich and Patricia Obee, who won gold at the second World Rowing Cup, will certainly be a crew to watch, as will Denmark's Juliane Rasmussen and Anne Lolk Thomsen. They beat the New Zealanders to win a silver medal at the third World Cup.

It will also be wise to keep an eye on Netherlands' Maaike Head and Ilse Paulis. They set a new world record of 6:47,69 seconds six weeks ago to qualify for the Games.

McCann, former under-23 world champion, describes rowing at the highest level as a true challenge. 'There are so many aspects to rowing. Technically, you must have a sound technique, and physically, you have to be strong and fit to make the boat go faster. Rowing is also a huge mental challenge, especially when competing at the highest level. To really put your body on the line is a huge task but one Ursula and I relish.'

According to Grobler, during the past four years she got up every morning visualising how it would feel to win an Olympic medal. 'To wake up every morning with such passion is a privilege not shared by many people; I am lucky to have it.'

Andrew Grant (Tuks/hpc), who coaches McCann and Grobler, predicts that the women's lightweight double sculls will be a tightly contested affair. Eight crews will battle for the six spots in the final. 'There is certainly a good chance for us to medal, but Kirsten and Ursula will have to keep their wits about them. The racing will no doubt be intense. Our first objective will be to secure our place in the final and, having done that, we can nail down our best race for a medal.'

Grant also coaches the women's pair crew, Kate Christowitz and Lee-Ann Persse, who won the gold medal at the World Cup in Italy and finished fourth in Switzerland. 'I would say that Kate and Lee-Ann are a bit of an unknown quantity. Despite being a relatively new combination, they have shown steady improvement this year – hopefully more than their opposition. We are certainly optimistic that our women's pairs will be able to fight for a podium finish.' 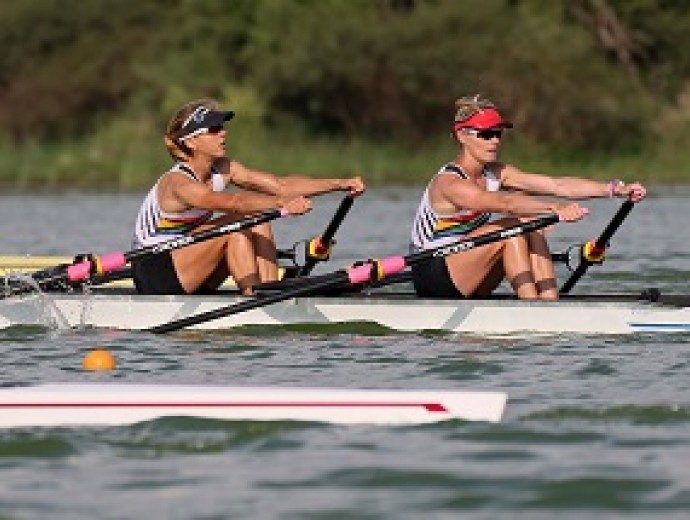