#TuksRowing: Thompson and Smith in a quest to win 2nd gold medal at the Games

At the Olympic Games in Rio on Sunday, 7 August, rowers James Thompson and John Smith will be on a quest to accomplish what very few other South African athletes have been able to do. They will try to win gold medals in two consecutive Olympic events.

Those in the know predict that the Tuks/hpc crew will most likely be in the mix when the real fight for medals starts.

One of the definite highlights for South Africans during the 2012 Olympic Games in London was when Thompson, Smith, Matthew Brittain and Sizwe Ndlovu won the men's fours. It was the first time a South African crew won a gold medal at the Games.

When Brittain retired in 2013 because of a recurring back problem, the South African rowing squad had to rethink their strategy to compete in Rio. This resulted in Thompson and Smith reinventing themselves as one of the top lightweight double sculls crews in the world, winning gold at the 2014 World Championships.

Brittain admits that he was impressed with way the Tuks/hpc crew adapted to sculls rowing. 'I always thought it would be extremely difficult to switch, but they made it look easy. Of course, it is easier to become good at one if you have already mastered the other, but it is very unusual to be exceptionally good at both. The double seems to suit them because it is more about power than the four and they are both really strong.'

According to Brittain, his former teammates have an excellent chance of medalling, perhaps even placing first. 'James and John obviously have the experience to know how to approach the event, but the Olympics is so big that it can throw even the toughest competitors. They will, of course, be up against some serious competition. France have the top-ranked crew and it will be tight between South Africa and Norway.

'In May, at the World Cup Regatta in Lucerne, Switzerland, the French crew, Pierre Houin and Jereme Azou, won. Norway's Kristoffer Brun and Are Strandli finished second with the South African crew in third place. The time gap between the three crews was a mere three seconds.

'I think the final will be close. It will probably come down to the training these teams put in during the six weeks since they last raced each other,' said Brittain.

Brittain describes the Olympic Games as the pinnacle for any rower. 'It creates a huge amount of pressure, not only from the media, family and teammates, but also from within yourself. You know you have only one or maybe two chances in a lifetime to excel. In the end, it all boils down to a few minutes of racing.

'I can honestly say that being an athlete at the Olympics is both absolutely amazing and incredibly stressful. On the one hand, there is an energy at the Games that is not present at any other competition. All the athletes are in their prime and focussed on making this ultimate sporting dream a reality. On the other hand, you realise that this is something to which you have dedicated your life and you cannot afford to squander the opportunity. The emotion and energy are unlike anywhere else in the world and it takes a lot of confidence to arrive at the starting line with your head in the right place.' 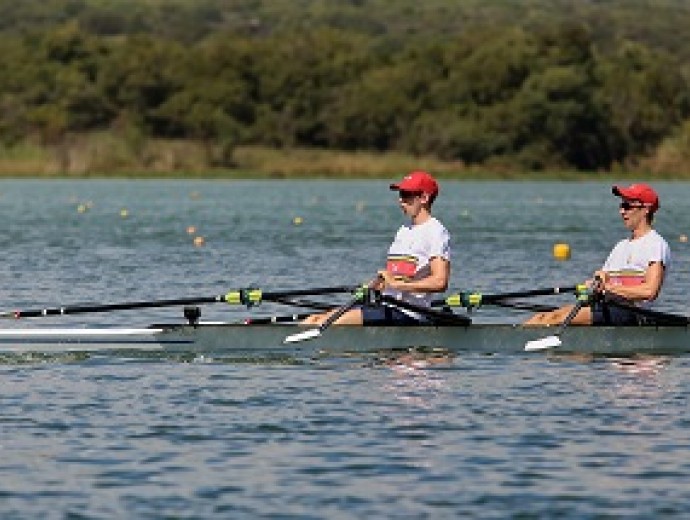