South Africa's top rowers certainly made their presence felt today in the finals of the World Cup Rowing Regatta in Varese, Italy, by winning two gold and two bronze medals.

It should not be a surprise that the stalwarts of South African rowing, James Thompson and John Smith (Tuks/hpc), won the gold medal in the men's lightweight double sculls final.

The decision made by Roger Barrow (national rowing coach based at the Tuks/hpc) to change the women's pair crew paid dividends. Kate Christowitz and Lee-Ann Persse were victorious in the women's final. Kirsten McCann and Ursula Grobler, who won the bronze medal at last year's World Championships, finished third in the women's lightweight double sculls final.

Coming into the final sprint of the men's lightweight double sculls final, Thompson and Smith had a slight lead, with both Ireland and the Netherlands within striking distance of the leading crew. When Ireland increased their stroke rate, so did South Africa. The two crews crossed the line almost simultaneously, but the South Africans had done just enough to ensure the victory. Gary and Paul O'Donovan (Ireland) took silver and, in a photo-finish for third, Belgium's Tim Brys and Niels van Zandweghe just beat the Netherlands by 0,17 s.

Thompson is quite realistic about their victory: 'It is always good to be in a leading position at the beginning of the season, even though not all the big crews are here. We're very pleased with the way we started this season but the fact that we have learned a lot during these past three days of racing is even more important. Now, as they say, it is back to the grind stone,' said Thompson.

In the women's pair final, Italy's Allesandra Patelli and Sara Bertolasi had a slight lead at the start, but Persse and Christowitz pressed into the lead. The Italians continued to challenge the South Africans all through the race but could not catch them. South Africa crossed the line first, with Patelli and Bertolasi finishing second. Spain's Aina Cidi and Anna Boada Peiro came through to win the bronze.

'So far, so good for our season, but we still have a long way to go if we stay in the same combination. From now on, we take every day as it comes,' said Christowitz.

The men's pair final turned out to be a tough rivalry among the crews of Britain, the Netherlands and South Africa. The Netherlands' Roel Braas and Mitchel Steenman, who finished fourth at last year's World Rowing Championship, got away the quickest, but Great Britain's Matthew Tarrant and Nathaniel Reilly-O'Donnell made a push that took them into the lead. When the last 500 m came into view, Great Britain, the Netherlands and South Africa's Keeling and Brittain held the medal spots, with the British winning in 6:40:06, the Dutch finishing second and the South Africans third.

'We wanted gold, but we are happy to have received a medal. It was a good chance to gauge where we are at this point in the season. We are heading home now to do some altitude training in order to be better prepared to win a gold medal at the Olympics,' said Keeling.

McCann and Grobler got away very quickly at the start of the women's lightweight double sculls final and were in the lead at the 500 m marker. China's Wenyi Huang and Feihong Pan were close behind in second position. The South African duo continued to lead through the middle of the race, but only just. Huang (gold medallist at the 2012 Olympics) and Pan eventually gained the lead using a smooth, efficient stroke style. Unfortunately for the South Africans, China's Dandan Pan and Miao Wang also overtook them to finish second with McCann and Grobler third.

'At the moment, we are still training very hard, doing races against our lightweight men to work on our speed. The whole team is pushing each other and going for gold in every race. We still have an exciting few weeks ahead because, although we qualified our boat, we still have internal selections coming up,' explained McCann. 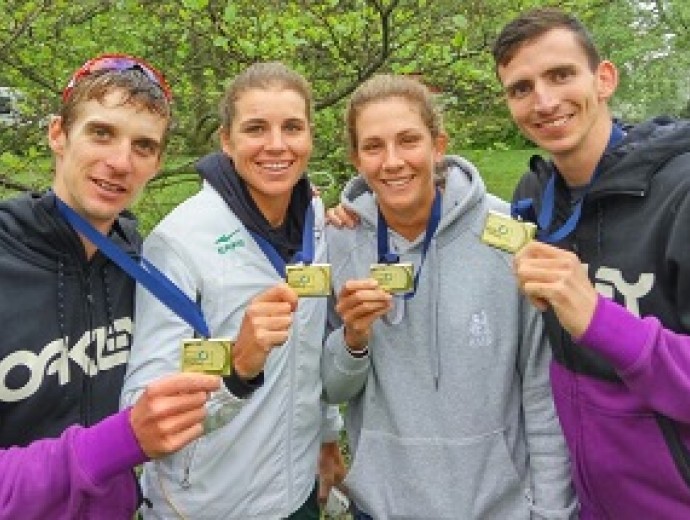