Three South African crews will be in action at the historic Henley Regatta in Britain this week.
Shaun Keeling and David Hunt team up in the men’s pairs, Olympian James Thompson and John Smith go off in their lightweight combo (against heavyweight opposition) and two more Olympians, Lawrence Brittain and Sizwe Ndlovu team up with Jonty Smith and Vincent Breet in the men’s fours.
When he teams up with Hunt on Thursday, Keeling is determined to make amends for last year when, according to him, his performance was a ‘classic scenario of snatching defeat from the proverbial jaws of victory’.
‘In the final of the Silver Goblets & Nickalls’ Challenge Cup last year, Vince and I were leading up to the halfway mark when, for some inexplicable reason, we simply fell apart over the second part of the race. There is no excuse. We just rowed badly,’ Keeling said.
Holland’s Julien Bahain and Mitchel Steenman beat the South Africans by two lengths. ‘This defeat still burns inside me and it’s my main incentive to do my utmost to win this time,’ the Tuks/HPC rower said.
Keeling actually has a good track record at the Henley Regatta, having won it with Ramon di Clementi in 2008 and he was also runner-up on two occasions.
According to Keeling it does not take anything special to win the Henley Regatta. ‘Because there are so many variables at play during the race, the secret to success is to be able to stay calm. To begin with, it is a knockout competition. This means that, instead of racing against six teams like at a World Cup or World Championships, you race against only one other boat with the winner going through to the next round. The race is slightly longer than two kilometres and you have to watch out for swans on the water.
‘House boats can also cause quite a swirl on the water which makes rowing more difficult. In short, the rowing can be a bit chaotic.’
Keeling predicts that the British might be the team to beat.
Last year’s world champions, James Thompson and John Smith, will be the other South African team and they certainly also have aspirations of winning at the Henley Regatta. In their two previous attempts at the Henley Regatta they were beaten in the semi-finals of the Double Sculls Challenge Cup.
‘Hopefully it will be a case of “third time lucky” for us, but obviously we are up against the big boys,’ Thompson said referring to the fact that they, being a lightweight crew, will be competing against the heavyweights.
It’s a known fact that the odds are slightly stacked against a good lightweight crew managing to beat a good heavyweight crew, but it can be done. Last year Stany Delayre and Jeremie Azou from France beat the big boys.
‘If we could race with a tailwind our chances to win would certainly improve. What I like about competing at the Henley Regatta is that we, being a lightweight crew, are taken out of our comfort zone which is good for us. You cannot always race in circumstances where everything is in your favour.  Sometimes you have to put yourself out a bit more. If we are lucky enough to pick up the win, it will be all the more satisfying,’ says Thompson, who compares the Henley Regatta to the Wimbledon tennis tournament.
‘The first Henley Regatta was held in 1839, which means that it is one of the oldest sporting events in the world. I love the history involved with it. Because it has so much tradition, it will be even more special to be able to tick it off by winning.’ 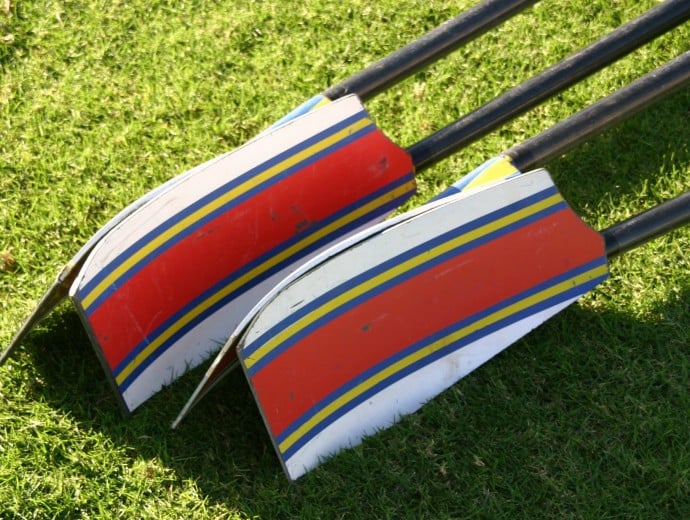