TuksRowing participated in the University Sports South Africa (USSA) rowing sprints regatta in Misverstand Dam in the Western Cape, which took place from 20‒22 March 2015. This year’s performance was the closest the University of Pretoria has ever come to an overall win in this event. In the end the trophy went to four-time winners, the University of Cape Town.

TuksRowing did not have its elite student rowers at the event as they were called up for a national camp in Lesotho. It was again left to the new ‘#StripeGeneration’ to ‘#EarnTheirStripes’, and they most definitely did. The rowers raised the standard to achieve the strongest team performance and progression that has ever been recorded by TukRowing at USSA Rowing.

Racing commenced on Friday afternoon with all the boats that entered progressing to the finals later that afternoon. The medal tally began with the TuksRowing women’s vice-captain Ashleigh Dunlop winning the first final in the women’s B 1x race. Nicole Van Wyk and Joanne Etzinger won the women’s A 2x,  Katlego Sotsaka won the men’s A 1x event and Christopher Mittendorf took first place in the lightweight men’s 1x event. A classy performance by Sean Barclay and Vaughn Botes saw them win the men’s B 2 event to make it five wins out of five events for Tuks Rowing.

The club then progressed to the bigger boats where the Tuks men’s B 8 dominated the field with an exceptional win over Rhodes University who proved to be fierce competition. The day of racing came to a close with the women’s A 8 team, Amy Hancock, Nicole van Wyk, Imogen Mackie, Erryn Green, Megan Magnussen, Ashleigh Dunlop, Siobhan Hall and Joanne Etzinger coming through the line in silver position after a big push, passing the University of Johannesburg and Rhodes University (who had both beaten them convincingly earlier this year).

On Saturday morning, rain and wind created difficulties for all participating, but these conditions failed to disrupt the rowing club’s momentum from the previous day. They managed to make it to the finals in all of the events entered, keeping the club in a strong position for the overall points trophy.

The finals got off to a positive start with Katlego Sotsaka and Michael Voerman winning the men’s A 2x and Christopher Mittendorf and Ryan Delaney winning the lightweight men’s 2x. The next event was the men’s B coxed fours race where Sean Barclay, Stuart Chamberlain, Charles Stevens, Vaughn Botes and cox Jason Hunter cleaned up the men’s section.

Entering the final stages of the competition, the University of Pretoria, the University of Cape Town and Rhodes University were very close in the overall points tally. Nicole van Wyk won in the women’s 1x, then Christopher Mittendorf, Michael Voerman, Katlego Sotsaka and Ryan Delaney won the men’s A 4x. This was followed by a surprise win and a fantastic performance by  novice four, Birgit Schiack, Marrisa Viljoen, Montana Wright, Jamie Hamilton and cox CJ Joubert in the women’s D coxed four. The points tally was intensely close and it came down to the last two races of the day, the women’s A 4 and men’s A 8, to ultimately decide the regatta. Conditions were extremely difficult and the teams did their best but couldn’t walk away with the wins in these events.

Jason Hunter (club cox) described the conditions as some of the most difficult he has ever experienced: ‘The wind and waves were extreme but we did our best. There was nothing more we could do’.

In the end the University of Pretoria placed fourth in the women’s section, first in the men’s section and second overall. It was an exceptional team effort and TuksRowing is looking forward to the 2016 edition of the event. The next regatta that the club will participate in will be the South African Rowing Championships on the weekend of 25 April, where Tuks will field a full team of athletes. 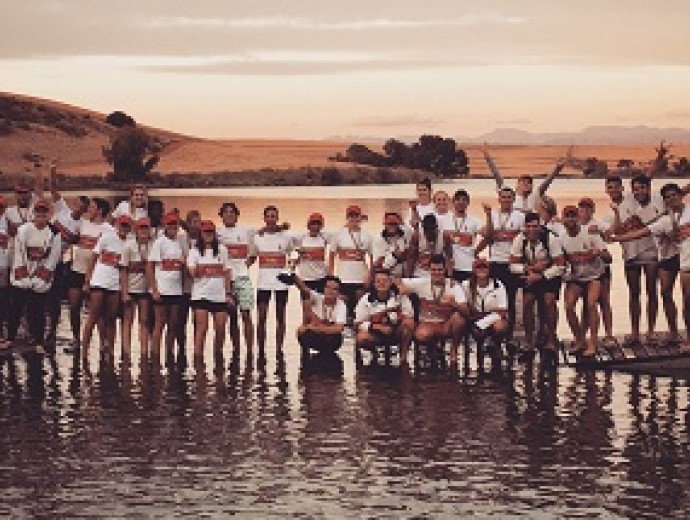