Danielle Roodt awarded a DST fellowship for her PhD

‘First I was overjoyed when I received the email informing me that I had been nominated for the Department of Science and Technology (DST) doctoral fellowship, and then absolutely thrilled to be a winner of this prestigious award.’

These were the words of an elated Ms Danielle Roodt, a PhD candidate in the Forest Molecular Genetics (FMG) Programme at the Forestry and Agricultural Biotechnology Institute, who was a winner in the DS – Albertina Sisulu Doctoral Fellowships category.

She added: ’It is an incredible honour to have been awarded this fellowship. Following in the footsteps of Mama Albertina Sisulu, I hope to inspire young women to follow their dreams, especially those that involve pursuing careers in the STEM fields.’

.In 2017, she received a Whitehead Scientific Travel Award to present her work at the annual Plant Biology Meeting held in Honolulu, USA, and in 2018 she was awarded the American Society of Plant Biologists (ASPB) Travel Award to present her research at the same meeting, which this year was held in Montréal, Canada. She had also presented at the Plant Genome Evolution conference in Sitges, Spain, and at numerous national conferences. Ms Roodt is a recipient of the NRF Scarce Skills Doctoral Scholarship and the University of Pretoria Doctoral Support bursary, and is an ASPB Plantae fellow.

Ms Roodt also received Golden Key International Honour Society membership for outstanding academic achievements, leadership and service as a student, has acted as a judge at the Northern Gauteng Expo for Young Scientists since 2013, and has been involved in undergraduate tutoring since the beginning of her postgraduate career.

‘Science has always been an important part of my life. I grew up in an environment where asking questions was more important than getting answers and where knowledge ruled supreme. I am continuing my studies in science because I want to generate knowledge and share what I discover and learn. By completing my postgraduate studies I can create the perfect environment in which to live out this dream,’ Ms Roodt explained.

The Department of Science and Technology (DST) has, since 2003, been hosting the annual Women in Science Awards, which was this year renamed the South African Women in Science Awards (SAWiSA), to celebrate and reward distinguished female researchers in South Africa. This prestigious event, hosted annually during August in recognition of Women’s Month, emphasises the importance of education – especially for young girls – and encourages attendees to be role models for youngsters interested in following careers in the STEM fields (science, technology, engineering and mathematics). 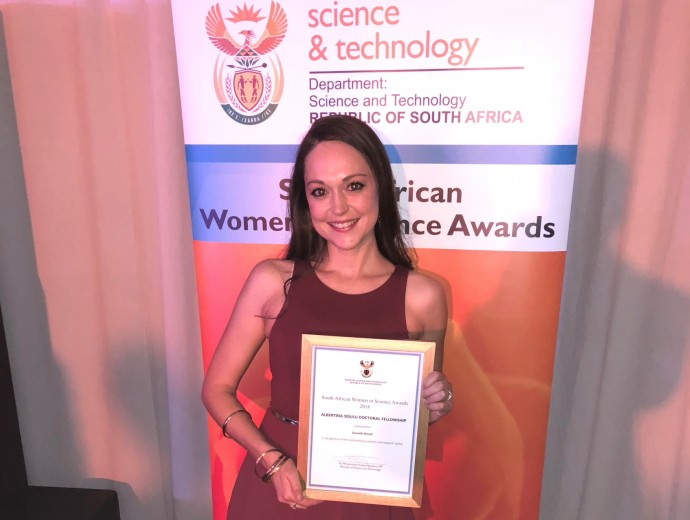