Forests are living habitats that contain life in all its incredible forms. Towering trees create canopies that are home to an array of species – many of which are found only in the forests they occupy. The forest floor is a traffic zone of insects and animals creating nutrients for plants to use. Many forest plants have medicinal value and serve local communities living in surrounding areas. Forests, however, are under threat. Logging companies, mining companies, agriculture, illegal hunters and poaching, as well as the development of roads and other infrastructure are fragmenting forests.

In South Africa alone, 82% of coastal forests have been lost and 85% of species' abundance living in forests across the world are said to be impacted by forest fragmentation. Forest fragmentation is the breaking up of large forests into smaller, more isolated versions that are "hemmed in" by human land-use types (matrix habitats). Remaining fragments are then also exposed to edge effects associated with these matrix habitats. This is not a good thing as fragmentation of forests impedes the creation of a diverse range of niches available, reducing places for species to forage and breed, resulting in a loss of species.

In South America, for example, army ants need large areas of forest to roam, with flocks of insectivorous birds following them. The fragmentation of the Amazon means that many areas cannot harbour these colonies of ants anymore, and many associated bird species have also vanished.

Dr Pieter Olivier from the Department of Zoology and Entomology at the University of Pretoria is part of an international collaboration looking at how forest edges have a global impact on forest vertebrates by collecting data of over 1 500 forest vertebrates. The team's work was recently published in Nature and highlights how biodiversity is changing as a result of deforestation – forcing some species to the brink of extinction while others flourish in the changing environment.

A forest edge is the interface between forests and non-forest areas. Olivier explains that edge effects create new habitats that are much harsher than the interiors of a forest. They tend to be hotter and dryer, with more exposure to light. This causes a change in vegetation type and introduces more pioneer and invasive species. The study collected data from fragmented landscapes worldwide to investigate how forest edges affect the abundance of species. One thousand six hundred and seventy-three species of mammals, reptiles and amphibians were analysed to see how they respond to edges. Often, as a result, forest core species are pushed back by these new and invasive species, creating a scenario of winners and losers. Olivier explains the importance of conserving core species because they cannot survive anywhere else. What makes the conservation of these species even more sensitive is that they are usually quite rare already, so any small change can have a very dramatic and often devastating effect on them. Edge species, however, tend to be tougher and can survive in most habitats. This international study, led by world expert in forest fragmentation Professor Robert Ewers of Ecology at Imperial College London, is a first-of-its-kind study using new spatial and statistical analyses that combine data from across the world, creating a metric of fragmentation effects on each forest species. What makes the international collaboration exceptional and quite different to traditional fragmentation studies is that it modelled an entire landscape, determining edge effects in every specific scenario across the selected landscape. Traditionally, fragmentation studies were only able to determine whether edge effects were high or low. This model is able to determine whether edge effects are high or low and every variable in between. A diversity of forests from across the world were studied, from rain forests such as the Amazon to coastal forests found in South Africa. The study was able to get very accurate and comprehensive results that were modelled on 22 landscapes from across the world.

As expected, the effects of forest edges on species can be quite varied. The study explains that half of the world's forest habitat is now within 500 metres of a forest edge due to the expansion of road networks, logging, agriculture and other human activity.

Obviously, nature reacts best to nature and when forests are surrounded by natural grasslands or woodlands the edge effects appear to not be as severe as when surrounded by sugar canes and plantations. In the first case scenario forest species tend to be unaffected and so edge effects tend to go unobserved. When these habitats are transformed into stark human-modified habitats then high contrasts and strong edge effects are observed.

Prior to Olivier's study, there were no records on the history of South African coastal forests and where they once occurred. In order to establish how much of these forests have been lost, Olivier developed a model indicating where forests would typically have been in South Africa by looking at the conditions of existing forests in the country and matching similar conditions elsewhere. Areas with similar climatic conditions that would most likely have been coastal forests in bygone years are now typically plantation forests and sugar cane. From this model, Olivier was able to determine that 82% of South Africa's coastal forests have, in fact, been lost. Olivier sampled birds and trees inside these fragmented forests to see if the size of the forest or the habitat that surrounds the forest affects the composition of these species. Without varying niches available within the forest, a decline in species is observed. He specifically noticed a decline in insectivorous birds. The simplified structures that are fragmented forests probably harbour impoverished insect communities, resulting in a decline of several associated species.

While most forests across the world seem unable to escape the destruction of human activities, South African coastal forests are in a fortunate position as most remaining forests are found in protected areas, such as the iSimangaliso Wetland Park. Because of this protected state, Olivier is hopeful that these forests will not be fragmented or degraded further.

The mining company RBM has been mining sand dunes along the KZN north coast, since 1979. However, during the early 90s, they initiated an extensive rehabilitation program that is now the longest-running rehabilitation program in Africa. Some of Olivier's research done on these rehabilitating forests suggest that they are recovering the structure, composition, and function that are associated with undisturbed coastal forests in the region, which is good news for species that depend on coastal forests to survive.

The international team of researchers intend to continue in their efforts to ensure optimum protection of forests. Their work continues to look at impacts on biodiversity caused by forest loss and fragmentation, specifically looking at how best to preserve forests, addressing global-scale isolation and area effects.

Global-scale isolation looks at the distance that fragmented forests are from each other and whether species are able to move between them. Area effects compare fragment sizes. Future plans of the research team are to determine whether it is correct to expect that as fragment size increases so does the number of species. Is a small fragment a subset of a larger one and how do species utilise space within these areas? Is it better to conserve one large fragment because more species exist there or should all fragments, irrespective of size, be conserved? This team plans to find these answers.

The study has already provided useful information for land management, with this model serving as a valuable tool to guide conservation efforts. The next step of the study will use this data and software to allow managers to create "optimal landscapes" that combine forest use with biodiversity conservation, explains Ewers.

Someone once said that if you walk in a forest you will lose your mind, but find your soul. Forests are therapeutic, rejuvenating and inspiring for the soul, but more than this, there is a wider responsibility to save the forests of the world.

Even city dwellers that are far removed from forests have an obligation to care about the state of the world's forests. The protection of forests affects everyone. If forests are fragmented or destroyed, we lose a fundamental source of carbon storage potential. Global warming and drastic effects on climate change will be the inevitable result for us all. 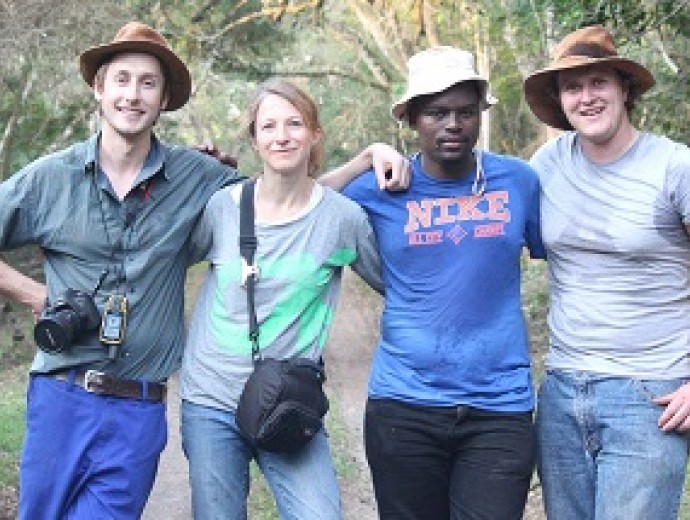