UP ready to address challenges in agriculture for next hundred years

Not only did the Faculty of Natural and Agricultural Sciences at the University of Pretoria (UP) celebrate a hundred years of agriculture at a prestigious event on 7 November, but it also recognised Dr Johan van Zyl, former Vice-Chancellor and Principal of UP and current CEO of African Rainbow Minerals as the UP Agriculturalist of the Century.

'This year marks one hundred years of agricultural science at the University of Pretoria. A centenary celebration should not bring complacency; it gives us an opportunity to reflect on the past, take stock of the present and consider the future. We should formulate a vision for the future to reach our desired destination and set the foundation for the next hundred years of agricultural science at the University. The University is well-positioned to take up the challenges faced by agriculture,' said Prof Cheryl de la Rey, Vice-Chancellor and Principal of the University of Pretoria. Prof De la Rey was one of the keynote speakers at the official centenary celebrations.

Dr Johan van Zyl, a former dean of the Faculty, UP alumnus and CEO of African Rainbow Capital, emphasised the crucial role of academic institutions in the future of food production. 'There are a few megatrends that will shape and influence society in general, and the role of agriculture specifically. These include the formation of megacities, advances in biotechnology and the fourth industrial revolution, which will result in drastic change, a new norm and many challenges. In agriculture, the challenges are centered on training and research.'

'Agriculture is much more complex today as it no longer has to deal only with farming-related issues, but also with issues that address a wider eco-system. We will have to move away from agriculture as a single discipline to a multidisciplinary approach to focus on the broader issues in agriculture. I believe the University of Pretoria is well positioned to continue playing a leading role in this regard — for example, in the 2017 Center for World University Rankings the research conducted by the Faculty's Forestry and Agricultural Biotechnology Institute (FABI) earned UP the second position in the world for the study of mycology,' added Dr Van Zyl.

Dr Van Zyl was also announced as the University of Pretoria Agriculturalist of the Century at the gala event. He is honoured for his influence in both the Faculty and the agricultural sector as a whole. Dr Van Zyl was one of the masterminds behind the Postgraduate School of Agricultural and Rural Development in the Faculty, and played a major role in establishing the Forestry and Agricultural Biotechnology Institute (FABI) at UP. Over the past few decades, he has had a remarkable impact on his alma mater, the University of Pretoria. Dr Van Zyl still serves on the UP Council. He is a truly exceptional agricultural scientist, with two doctorates, more than 300 scientific publications, many industry awards and accolades, and a career that spans from academia, to private industry and community development. 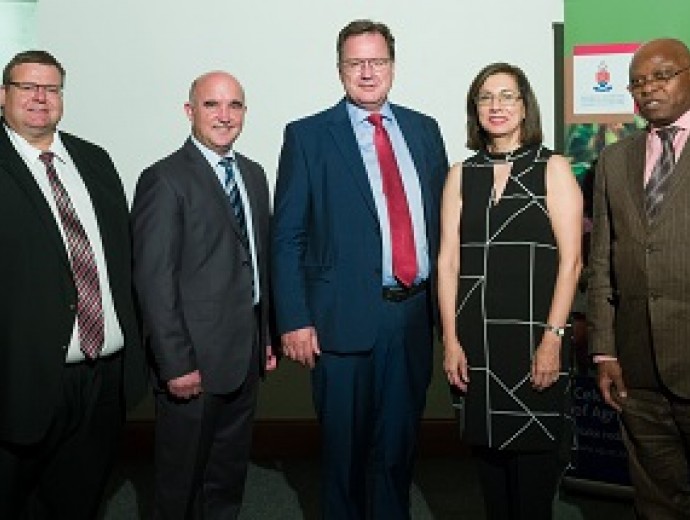