Join the hunt for pathogens in the fynbos!

South African fynbos largely makes up the smallest floral kingdom in the world and is the only one that occurs entirely in one country – ours. These plants are most abundant in the 100 to 200 km wide coastal belt stretching from Clanwilliam on the West coast to Port Elizabeth on the southeast coast of the country, where it accounts for half of the surface area and 80% of the plant species in the region. The Cape Peninsula alone has 2 285 species in an area one third the size of greater London! As a result of this, the area was declared one of the world's 34 biodiversity 'hot spots' and in 2004 was confirmed as a UNESCO World Heritage Site. Although 20% of this kingdom is already officially protected, its sheer diversity means that much remains to be done to ensure that this botanical treasure is conserved for generations to come.

To do his part in helping to conserve this unique part of our South African heritage, Mr Joey Hulbert, a PhD student in the Department of Plant and Soil Sciences at the University of Pretoria (UP) and an Affiliate Research Student in the Department of Conservation Ecology and Entomology at Stellenbosch University, has initiated a citizen science project that enlists the help of the public to identify pathogens (tiny organisms that cause disease) that may be responsible for killing some of the fynbos species in the region. The Cape Citizen Science project is supported by the Forestry and Agricultural Biotechnology Institute (FABI) at UP and Mr Hulbert has already managed to engage more than a hundred participants in his scientific research about plant disease in the fynbos.

Mr Hulbert's research focuses on a fascinating group of microorganisms called Phytophthora, which is the Greek term for 'plant destroyer' (phyto = plant, phthora = destroyer). Species in this group are known to be responsible for diseases such as the Irish potato famine and sudden oak death. According to Mr Hulbert, Phytophthora cinnamomi (a pathogen that was first described killing cinnamon trees), is known to cause root disease in many protea species in the fynbos and it may even be killing the silver trees around Table Mountain.

For the first phase of the project, Mr Hulbert is calling on the public to share their observations and report dying plants that they encounter while hiking or cycling in areas populated by fynbos. Participants can contribute samples that could lead to the discovery of new Phytophthora species in an area outside the reach of the organisers of the project, provided that they have permission from the landowner to do so. He however cautions that participants should guard against disturbing red-listed species (by rather marking the GPS point and submitting a photograph using the tools provided on the Cape Citizen Science website when they encounter a sick or dying plant.

'You can save a lot of plants by reporting an epidemic early,' says Mr Hulbert. 'Early detection is critical for preventing the spread of invasive species. Your report may even be the first of its kind! Reporting new disease sightings quickly will allow land managers to try to eradicate the invasive disease causing organisms before they spread too far.'

Landowners willing to permit research activity on their property are encouraged to get involved with the project and, because citizen science projects provide many opportunities for experimental, non-traditional, hands-on and outside-the-classroom educational activities, schools in the area can also contact Mr Hulbert for support in getting learners involved in hunting for pathogens in the fynbos as a fun and practical learning experience.

The project is partially funded by the public and the success of a recent crowd-funding campaign illustrates that there is public support for this type of research, as well as a need for the alternative education it provides outside the classroom. Members of the public are invited to contribute to this project by sponsoring an activity for a day or a week (for example covering the costs of food and transport for a group of youth that would not normally have such an opportunity), helping to organise an outreach or sampling activity for school children, contributing incentives for participation (for example extra credit, materials, contest awards, food/beverage coupons), or by directly funding the project to purchase lab supplies or sequencing costs.

Some of the world's favourite plants, including gladioli, freesias, agapanthus, proteas and ixia, originate from the South African fynbos flower kingdom. When next you are hiking or mountain biking through the gorgeous fynbos biome, keep an eye out for dying plants and, if you see any, take a photo, mark the GPS point and share your observations on the Cape Citizen Science website. Come learn with us – who knows, your contribution could lead to the next big discovery! 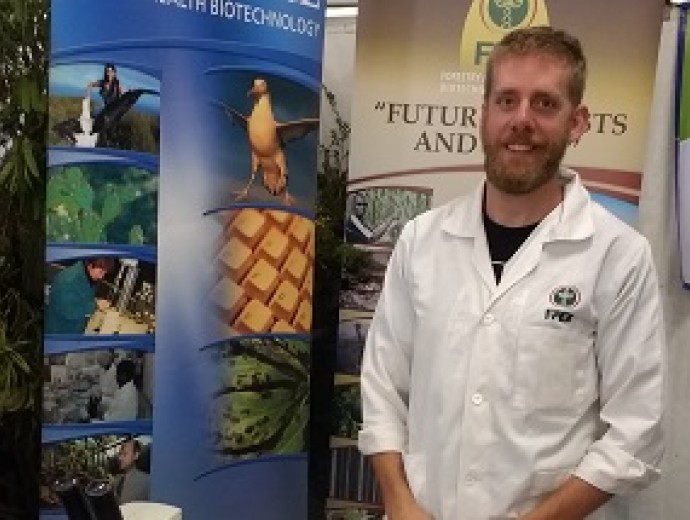