In what is regarded as a first of its kind, a group of South African veterinarians, together with a maxillofacial surgeon, succeeded in surgically lengthening the misaligned jaw of an adult male chimpanzee.

He came to Chimp Eden in 2010 from the Central African Republic where he was a victim of the bushmeat trade and kept as a pet. He was isolated in a small barred cage made of cement, with no trees or grass to enrich his life. Rescuers were made aware of Claude's plight and the JGI was contacted.

Claude has a friendly personality and settled well into his new group at the sanctuary in the Mpumalanga province in South Africa. Though he had been locked up alone for most of his life, he displayed good social skills and was accepted by the other chimpanzees. As a fairly large male, Claude was able to ascend quite rapidly in the hierarchy of his new group. During Claude's examinations in 2016, Dr Gerhard Steenkamp, a Senior Lecturer at the Faculty of Veterinary Science at the University of Pretoria (UP) with a special interest in veterinary dentistry, realized that Claude's jaw was misaligned and that he had difficulty in eating properly.

Initial radiographs showed that his lower jaw had sustained trauma many years before and had probably been fractured. The fracture was either poorly stabilized or not at all. It healed in an abnormal fashion, leaving Claude with a misaligned jaw.

Dr Katja Koeppel, a wildlife specialist veterinarian also from UP, arranged for a Computed Tomography (CT) scan at the local MediClinic in Mbombela in March 2017, and it was only after the CT was evaluated that the extent of Claude's deformity was evident.

At the same time, impressions of his mouth were made. Jaw length discrepancies can be corrected by orthodontic treatment or by corrective jaw surgery (orthognathic surgery). A 3D image of the CT scan performed on Claude

To ensure that the best decision for Claude was made, Doctors Steenkamp and Koeppel consulted a Pretoria-based maxillofacial surgeon, Dr Frits Hoogendijk, and discussed the options for Claude.

Considering his age and the type of misalignment present, the team decided that Claude's lower jaw had to be lengthened. This had to be done with precision, as the teeth still needed to interlock with each other in a manner that would provide Claude with a comfortable and functional bite.

Since no orthodontics would be possible before and after the surgery, the goal was to create a comfortable but functional bite for Claude in a single procedure. This type of surgery (a bilateral saggital split operation) is commonly performed on humans; however no record of such surgery on a chimpanzee or any other great ape could be found.

Multiple organizations collaborated to make the surgery possible. Apart from all the veterinarians and Dr Hoogendijk working pro bono, donations were also received from VinDMED Medical Suppliers (who donated several plates, screws, and other surgical equipment) and VetdentSA (who purchased the drill unit as well as specific instruments needed for the surgery). The JGI covered all travel and accommodation expenses. West Acres veterinary hospital in Mbombela made their theatre and staff available for the procedure. All travel arrangements for the chimpanzee to and from the hospital were made by Hi-Tech Medical Services.

On Monday, 18 September 2017, after weeks of preparation, the team assembled in Mbombela for the surgery on Claude the next day. Early on Tuesday morning, Claude was darted with an anaesthetic drug. Upon his arrival at the hospital, he was placed on his back and connected to a ventilator and the gas anaesthetic machine. In two and a half hours the team managed to split Claude's jaw and separate the left and right sides, and bringing the opposing surfaces of the teeth of the two jaws into comfortable contact for him. This entailed moving the left jaw approximately 12mm and the right jaw approximately 5mm. Both sides were stabilized with mini-plates.

His recovery after the surgery was rapid and rather uneventful. Dr Reynier Oelofsen from Chimp Eden reported that Claude started eating the day after the surgery. He was, however, reluctant to take his medication in the meals provided. Because Claude refers bananas, the fruit was used to medicate him. In just a few days Claude was eating the recommended soft diet and two weeks later, he is healthy and cannot wait to be reunited with his fellow chimps. The surgical team believes the procedure, a world-first on a chimpanzee, has changed Claude's life. He will be able to carry on playing and eating without discomfort.

During his examination in 2016, Claude's broken jaw was not the only medical problem he was diagnosed with. Claude underwent routine echocardiography, performed by Dr Anthony Zambelli (specialist physician at Inanda Veterinary Hospital) and was found to have a novel form of heart muscle disease, only recently described in humans and never before in chimpanzees. Isolated left ventricular noncompaction (ILVNC) is a cardiomyopathy caused by a failure of the left heart muscle to develop properly in the uterus. It can lead to clinical complications such as heart failure, arrhythmias, and cardio embolism, and Claude was put onto medication and dietary supplements for the management of the condition. He is currently doing well on the medication and will be monitored at least twice a year. 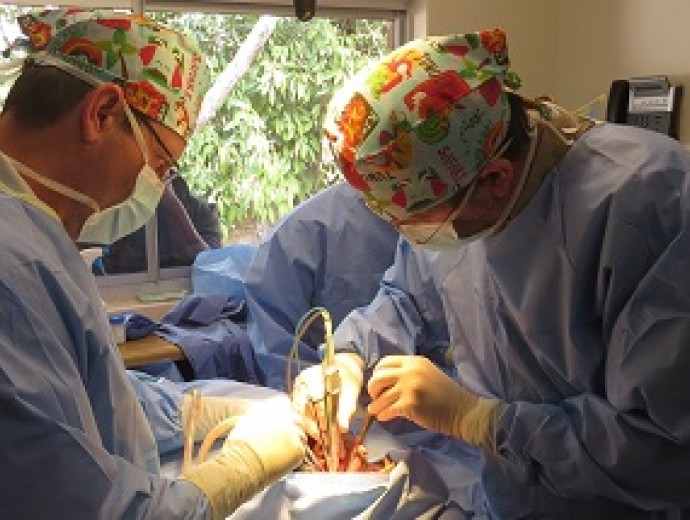