The waters around southern Africa host a high diversity of marine life, including many species of dolphin. One way to monitor where dolphins are and at what times, is to 'eavesdrop' on their environment and listen out for the vocalisations they make. As most animals make sounds, this process – called passive acoustic monitoring, or PAM – is increasingly being used to study a variety species, from frogs and bats to elephants. Dolphins make many different sounds, producing whistle and echolocation-click vocalisations throughout their day to interact with each other and their environment. Consequently, acoustic monitoring of dolphins can be a relatively cheap research method. We can use acoustic monitoring 24 hours a day for months at a time, by deploying many remote underwater microphones called hydrophones.

However, for this kind of monitoring to work, we need to know what sounds each species makes, and there is a remarkable lack of information on this in southern Africa. Researchers from the University of Pretoria and the University of Cape Town have been working together to solve this problem using acoustic data collected from several dolphin species around southern Africa. The research, led by Ms Florence Erbs from Sea Search, Dr Tess Gridley from the University of Cape Town, and Dr Simon Elwen from the University of Pretoria, was published in April 2017 in The Journal of the Acoustical Society of America. Erbs and her colleagues used a statistical approach to grouping the dolphin sounds. First, they broke up the whistle sounds into small fragments and looked at their characteristics in terms of pitch (frequency) and the shape (curvature) of their contours. As there were thousands of whistles, this was done with the help of a freely available piece of acoustic software called PAMGuard which was then used to classify the dolphin sounds into groups. Although this method has been used to classify the sounds of dolphins in the northern hemisphere, this is the first time it has been tested on data from southern Africa and the researchers report that the trials were very successful. Three dolphin species commonly seen in southern African waters could be easily recognised using this method: the common dolphin, the Indo-Pacific bottlenose dolphin and the common bottlenose dolphin. Recordings of the same species made in different regions (Plettenberg Bay in South Africa and Zanzibar Island in Tanzania), showed that the software could even be used to recognise different dolphin populations, similar to the way groups of people can be differentiated based on their dialects.

This work is part of an ongoing study looking into dolphin occurrence around southern Africa and the possible impact of climate change on where and when dolphins are found. The E3C project (Effects of Climate Change on Cetaceans), as it is called, is led by the Sea Search group (www.seasearch.co.za) and associated university-based scientists, using several underwater hydrophones to record dolphins. It is funded by the National Research Foundation, the University of Pretoria and the Claude Leon Foundation.

Another aspect of the project is documenting where and when members of the public see whales and dolphins. We invite members of the public to be part of this by becoming 'citizen scientists' and logging their sightings on our dedicated Facebook page or Twitter account (@seasearchafrica), or by contacting [email protected].

More about the authors:

Ms Florence Erbs is an independent marine mammal scientist, working in association with Sea Search Research and Conservation, a Cape Town-based non-profit organisation focused on the conservation of cetacean species.

Dr Simon Elwen, who is overseeing this NRF-funded E3C project, is based at the Mammal Research Institute at the University of Pretoria. He co-directs Sea Search Research and Conservation.

Dr Tess Gridley, who leads the acoustics elements of this E3C project, is based at the Centre for Statistics in Ecology, Environment and Conservation, in the Department of Statistical Sciences at the University of Cape Town. She also co-directs Sea Search Research and Conservation. 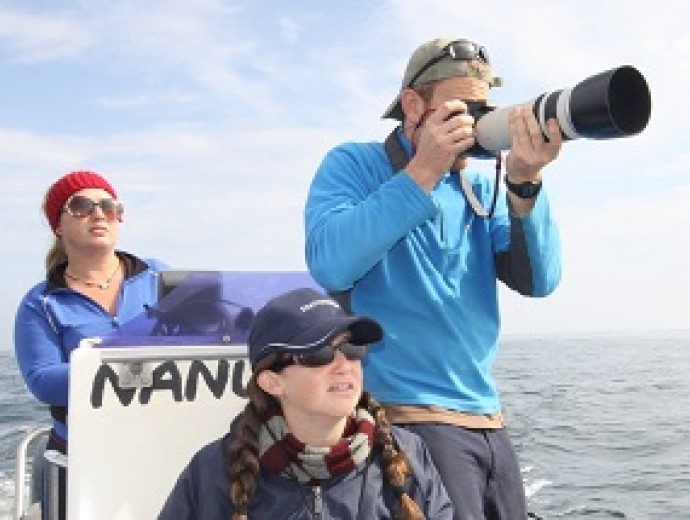