Researchers from the University of Pretoria's Mammal Research Institute Whale Unit, in collaboration with various partners, recently discovered the first evidence of a significant number of Antarctic blue whales off the west coast of South Africa since they were nearly hunted to extinction in the last century.

According to Dr Ken Findlay, the Director of the Unit, which is based in Cape Town, almost two million whales were killed in the Southern Hemisphere over the last 300 years, some 1,8 million of which were caught in species-centred serial bouts of modern whaling in the last century alone. Catches of over 700 000 fin whales, 210 000 humpback whales, 200 000 sei whales, and 345 000 blue whales decimated the Southern Ocean summer feeding aggregations. These species were easy prey for whalers during their long annual migrations from low-latitude winter breeding grounds to their summer feeding grounds in Antarctic waters.

Two subspecies of blue whales, the Antarctic blue whale and the pygmy blue whale, occur in the southern African and associated Southern Ocean region. Growing to 30 m long and weighing up to 180 tonnes, the Antarctic blue whale is the largest animal that ever existed on Earth. While the summer distribution of these whales is well defined in the Antarctic, the winter breeding grounds have never been adequately determined. Although some whale populations (such as local humpbacks and southern right whales) are showing strong initial recoveries from whaling, Antarctic blue whales remain the most depleted of the Southern Ocean large whales; the species is in fact classified as critically endangered by the International Union for the Conservation of Nature, and ranks as one of the most threatened of Africa's large mammals. Over the last century, the global population was reduced from roughly 239 000 to an estimated low of 360 individuals. By 1996 (30 years after whaling of blue whales was stopped) the population had recovered to 1 700 individuals and was increasing at a rate of about 7% per year.

Dr Findlay says that such a small population is difficult to monitor, particularly as its distribution and migrations outside of the Antarctic in summer are so poorly understood. He explains that the Antarctic sector south of Africa (0–70°E, also known as the International Whaling Commission Management Area III) contains the largest known summer concentration of Antarctic blue whales. Although the waters of the South African west coast do not provide a direct link between high and low latitudes, it is probable that many of the blue whales encountered in Area III migrate to or through this region in winter, as substantial catches were historically made here. Because of their very low population numbers, the fact that they are difficult to see and the lack of survey efforts off the shore of the west coast during winter (when weather is generally poor), there have been less than ten sightings of blue whales in South African waters since local whaling ended in 1975.

Owing to the challenges associated with visually surveying such a wide-ranging and relatively rare animal, the UP team had to find other ways to monitor these amazing animals. Fortunately, blue whales have one of the loudest calls in nature (189 dB re 1 µPa at 1m), which can be detected by recording instruments at distances of 200–1 600 km, depending on oceanographic conditions and the placement of the instrument in relation to the sound channel. Such detection ranges make acoustic monitoring of the population possible over a much wider area and with greater efficiency than visual detection. A further advantage of using acoustics is that surveys can be conducted in bad weather and at night, with little effort and at relatively low cost. With this in mind, the team deployed two series of long-term passive acoustic monitoring instruments on moorings in deep offshore waters: one off the west coast of South Africa, in association with the University of Cape Town's South Atlantic Mooring Basin Array Programme and the South African Department of Environmental Affairs Branch: Oceans and Coasts, and a second in Antarctic waters, in association with the South African National Antarctic Programme (SANAP).

These instruments record twenty minutes of each hour, every day for a full year. The recordings are stored within the instrument and retrieved on recovery. PhD student Mr Fannie Shabangu has analysed hours of these recordings. He said: 'The very characteristic Z-calls of Antarctic blue whales have been detected at both sites and, while the recordings in the Antarctic were expected, the relatively high rate of calls detected in local waters throughout the winter months of May to September are the first indices of the relative abundance of these ocean giants off the shore of the South African west coast since their decimation in the 1930s, and the first recordings of Antarctic blue whales in the low latitudes of the southern Atlantic Ocean.'

The long (up to 12 seconds), very low-frequency (below 30 Hz) Z-calls of Antarctic blue whales (so termed because of the characteristic shape of the call when viewed on a frequency/time graph), are just under the lower limits of human hearing and are analysed from the recordings through automated call detection software.

'These results will allow us to identify peak densities and distributions of blue whale in local waters through call rates (the more whales that are present, the more calls are expected) so that the timing and distribution of future surveys can be refined. This exciting discovery is the first evidence of Antarctic blue whales off the west coast of South Africa in any numbers since the cessation of whaling,' says Dr Findlay.

The recordings that the team has obtained to date also contain sounds from other large baleen whales including humpback and fin whales. 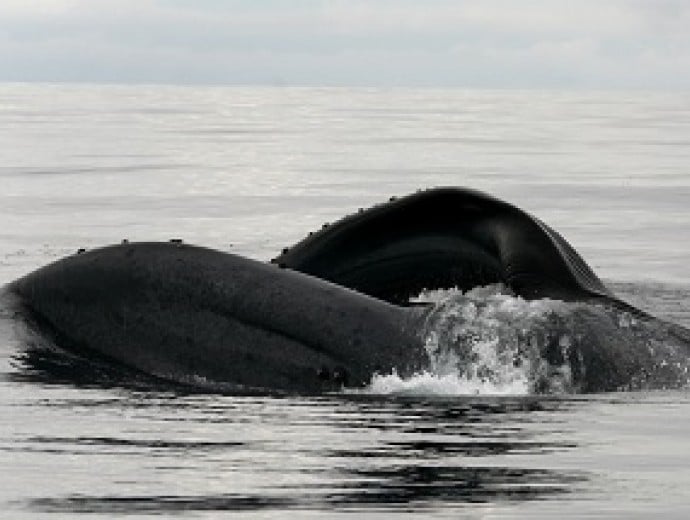