Learning from life in the waters

Imagine an island far removed from any human encroachment that teems with animal life. Such a place exists: it is called Marion Island and forms part of the Prince Edward islands archipelago, situated between South Africa and Antarctica. Under South African legislation, the archipelago is regarded as a ‘Special Nature Reserve’, possessing the highest level of protective status and set aside solely for the purposes of biodiversity conservation and research. Marion Island is home to unique flora and fauna and this uninterrupted marine habitat is a haven for breeding seals, seabirds and a resident population of killer whales.

The Mammal Research Institute (MRI) of the University of Pretoria (UP) is in the privileged position of being able to conduct research on the island, acquiring valuable new information about marine mammals and environmental changes in the region. The MRI’s Marion Island Marine Mammal Programme (MIMMP) has been doing marine research there for more than 30 years and has documented fascinating findings. Their primary research is aimed at understanding the ecology of seal and killer whale populations at the island. A current research focus is on how these populations interact with the changing environment. This group has published internationally significant findings related to species biology, population demography, foraging, movement and ecosystem interaction. Additional opportunistic findings have been bizarre, such as seals trying to mate with penguins, while other reports have included mass die-offs of fur seals, and sightings of vagrant/rare seal species at the island.

Marion Island is the terrestrial base of three species of seals, namely the southern elephant seal Mirounga leonina (SES), the sub-Antarctic fur seal Arctocephalus tropicalis (SAFS), and the Antarctic fur seal Arctocephalus gazella (AFS). The MIMMP is made up of a capable core team of researchers who perform tasks associated with the three seal species on the island, as well as the resident killer whales Orcinus orca (KW).

While work with killer whales is shore-based because of their near-shore visitation, and is therefore inherently not invasive, the UP team has devised ways to gather valuable information from seals without resorting to invasive means. Measuring the body mass of animals can provide useful information about the health of the animal and its environment, but can be difficult to measure without upsetting the animals Taking advantage of progressive technology, The MIMMP’s Principal Investigator, Dr Nico de Bruyn devised a less-invasive method to determine the weight of elephant seals using photogrammetry. The process enables Dr De Bruyn to calculate weight using measurements taken from photographs. The size and weight of animals are important variables in determining population processes, ecosystem changes such as food availability, and survival and reproduction.

While thorough research into the breeding and moulting periods of seals is done on Marion Island, southern elephant seals spend up to ten months of their annual cycles at sea. For several years, selected seals have been fitted with non-invasive sensors, sending environmental information from remote and icy locations. Putting tracking devices on marine animals like elephant seals provides researchers with insight into their foraging migrations and diving behaviour during these migrations. Because seals are able to go to places in the ocean not accessible to man (elephant seals can reach depths of 2 000 metres) they are able to collect information that would otherwise not be available. Dr De Bruyn says the devices have also revealed differences in the seals’ diving and movement behaviour based on sex and age. Researchers now know their foraging and diving are strongly related to oceanographic eddies (fluid dynamics), water temperature and primary productivity.

The MIMMP has deployed over 150 satellite-linked devices over the past 15 years and, thanks to such technology, research can be shared with the international research community in order for better understanding and research developments to occur. The international collaborative, Marine Mammals Exploring the Oceans Pole to Pole (MEOP), launched a data portal at the beginning of June 2015 that serves as a platform for learning more about seals’ foraging behaviour and migration patterns, as well as other comprehensive and valuable oceanographic data. UP’s MIMMP plays an integral role in MEOP and their data is shared widely among researchers across the globe.

The MIMMP’s work does more than merely provide a better understanding of marine mammals. As Dr De Bruyn notes, ‘this is just a piece of the bigger puzzle.’ Sub-Antarctic islands, such as Marion Island, are sensitive to change because of their comparatively simple ecosystems. These islands are also in a part of the world that is experiencing rapid climate change. Marion Island researchers have observed a decrease in rainfall and an increase in wind speed and frequency. Dr De Bruyn relates the findings of Marion Island researchers that these factors, together with an increase in the number of sunshine days, result in changing vegetation patterns, which affects the ecosystem of the area.

The work of the MIMMP enhances our understanding of marine top predator populations, their relationships to the environment and other species, and ultimately, how changes in their environment affect us as human beings. 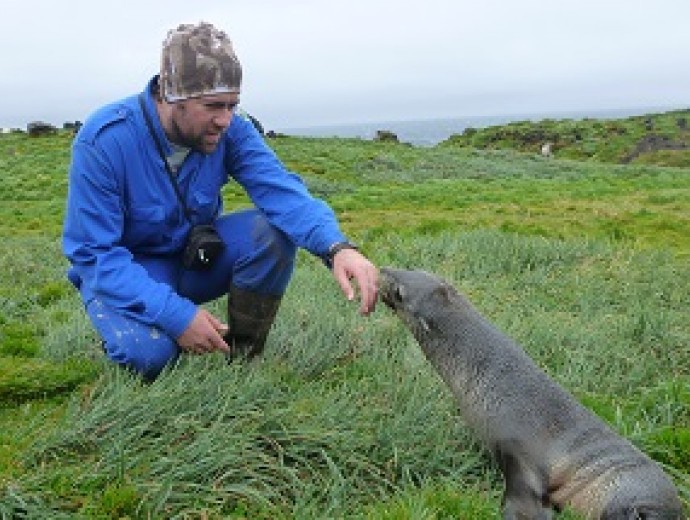