#TuksFootball: Nhlanhla Mabaso says mistakes are part of the game ahead of their second encounter of the 2022 Varsity Football edition

The TuksFootball team will be out to prove that tough times don't last, but tough players do when they clash against UJ in their second encounter of the 2022 Varsity Football edition on Thursday, 28 July.

Last week in Bloemfontein, things derailed in the game against UFS Kovsies. It led Tuks to a three-nil defeat and be at the bottom of the log. Staunch Tuks fans ought not to be worried. Tuks is known for being slow starters and winning when it starts to matter.

It is a given that Thursday's game played at Tuks will be a humdinger as UJ, the defending champions, also lost last week. Both teams got something to prove.

The Tuks captain, Nhlanhla Mabas, has a philosophical view about the recent defeat against Kovsies. Mistakes are bound to be made in every game. It is what football is about.

So on Thursday, his only expectation for his team is "Retain the ball at all cost. Defend as a team, attack as a team. In the end, it is all about team spirit. The team that wants it most is the one that is going to win."

Mabaso is definitely one of the team's elder statesmen. He has been part of the Tuks Varsity Football team since 2017.

"I only really got to play from 2018. I made my debut against CUT. I even got to score my first goal for Tuks in that game. Since then, if my memory serves me correctly, I think I scored about another five goals. But it is not as if I am keeping count," says Mabaso, who plays as a striker.

Asked what he considers to be his best attributes, Mabaso's answer was.

"I am powerful on the ball, which means I can hold up play. I also go for goals. That said, it does not mean I am a selfish striker. I will pass the ball to create better goal-scoring opportunities. Only one thing matters when I play: to help the team win. It is not important who scored the goals. As far as I am concerned, every goal scored is a team effort."

"Tuks football has a proud tradition. I have played under quite a few captains, and each impacted how I play and think about the game. To play for the 'Stripes' is special. When I step onto the field, it is as if I become a 'Lion'.

"The one thing I know is that as captain, I will make mistakes. I am, after all, human. My teammates must talk to me when they think I have erred. It is a case of me guiding them, and they guided me. I expect everyone to be the captain of their position."

Catch Tuks vs UJ live on SuperSport PSL & Variety 4 at 7:15 pm. Tickets are available for purchase on www.howler.co.za/collections/56 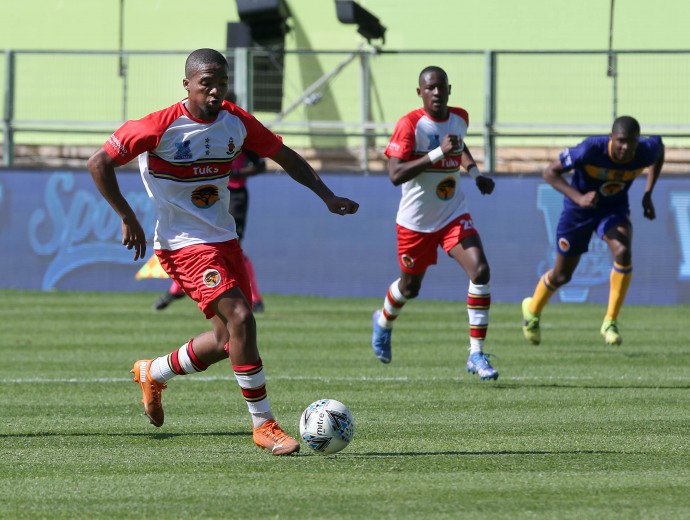