#TuksFootball: Tuks lost and gained status in the 2021 Women’s Varsity Football final and

The statistics of the Varsity Women’s Football tournament will show that the Tuks women's football team lost to UWC in the 2021-final, but it is not always a true reflection of what happened on the field.

Guts and on-field heroics can't be recorded with mere numbers. It comes from the heart. And of that, the Tuks players had plenty. As did the UWC players.

Both teams fought to the very last minute.  That is why after 70 minutes, there was still no score. UWC won 4-3 in a penalty shootout. Winning the Varsity title for the first time has been a long time in the making for UWC. Last night, they contested the final for the fifth time. It was only Tuks's second final appearance.

The TuksSport Director & CEO of hpc, Steven Ball, was full of praise for the Tuks performance.

"I am super proud. Since 2013, I have not seen a Tuks 'ladies' team play football like this. For me, the biggest thing is the character they showed. They never gave up.  The players were fit and fast. That was all you wanted.

"There might be tears at the moment. I feel for that. It is OK as it is going to build more character. Each player can hold up their head high," said Ball.

"You must be proud of what you achieved. I am over the moon. These tears must be tears of joy. Unfortunately, only one team can win.  And if the game ends in a penalty shootout, there are never any guarantees. But watch this space. This Tuks team is only going to get better. On Wednesday we are playing in the Sasol League. We have not yet lost a game in that league."

According to Tuks's captain, Morongwa Manamela, they were an inexperienced team when they started the Varsity campaign.

"What excited me is how we grew in confidence with each game. It was special to me to be part of a team that never gives up. I am confident that the experience we gained now will stand us in good stead every time we play."

Wendy Shongwe of Tuks, (now a TuksSport High School & TuksAthletics Academy graduate), was crowned as Player of the Tournament. She had put her body on the line minute after minute game after game trying to score goals or disrupt her opponents when they were on the attack. It meant she was continuously running, at times going down hard.

"Losing the final is not the result we wanted, but still, I am proud of the way my teammates played to get us to the final," Shongwe said. 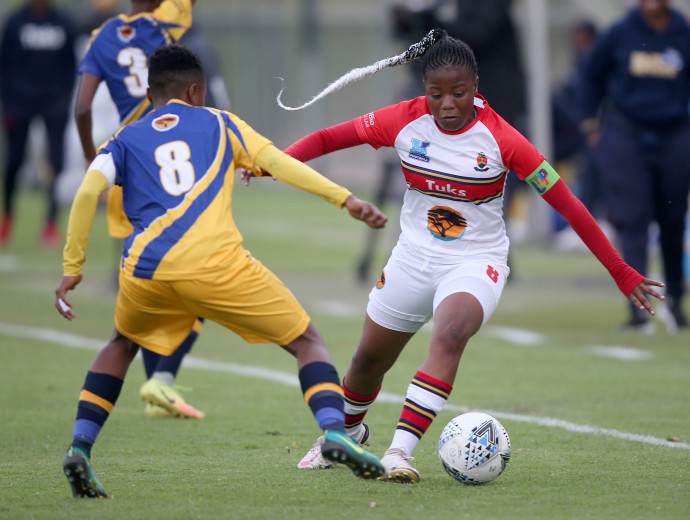