Prof Estelle Venter has been working in the Faculty of Veterinary Science at the University of Pretoria (UP) for the past 30 years. She has produced more than 70 publications and for the past four years she has been one of the top ten researchers in the Faculty. She supervised and co-supervised on average ten postgraduate students per year for the past seven years.

A professor in the Department of Veterinary Tropical Diseases, her years of specialisation in virology, especially in arboviruses, have earned her a C2 rating from the NRF.

Since doing her master’s degree, Prof Venter has been working on the Rift Valley fever virus. This mosquito-borne virus infects both humans and animals. The 2008 to 2011 outbreaks of Rift Valley fever in South Africa resulted in a high number of deaths, including that of a young veterinarian. Prof Venter’s research focuses mainly on the epidemiology (incidence, distribution and possible control) of the disease.

Prof Venter has also studied diseases that can have significant implications for farmers and communities, particularly bluetongue and lumpy skin disease, which occur predominantly in livestock.

The bluetongue virus is carried by small biting midges of the genus Culicoides and affect mainly sheep, but also other ruminants. Symptoms include high fever, salivation and swelling of the face and tongue and, in some cases, the tongue turns blue. Adding value to communities supported by the Faculty, Prof Venter is conducting research on bluetongue in the Mnisi area near Bushbuckridge Municipality in Mpumalanga. The research investigates the interfaces among communities, livestock and wildlife, as well as aspects not commonly studied in South Africa, for example the occurrence of bluetongue in cattle. Having worked on the virus for such a long time Prof Venter has come to be regarded as an expert and her research has evolved to the molecular level investigating the very intricate system of reverse genetics in the virus.

She explains that the bluetongue virus is closely linked to the virus that causes African horse sickness, a highly infectious and deadly disease that affects mainly horses. Prof Venter and Prof Alan Guthrie, Head of the Equine Research Centre in the Faculty, have been collaborating in research on the viruses and the biting midges that carry them in order to better understand their occurrence and prevalence in South Africa.

Prof Venter has also done hugely successful research on lumpy skin disease. Since embarking on this research about six years ago, she has come to understand how the disease is transmitted between animals – a topic that had previously given rise to much speculation. Prof Venter and her colleagues discovered that ticks are the vectors and they were the first to publish on this form of transmission.

Lumpy skin disease affects mainly cattle, but antibodies to the virus have been found in wildlife such as giraffe, buffalo and impala. While it occurs mainly in Africa, the disease has now also been reported from the Middle East and there is a real threat that it may spread to Europe. It is speculated that the illegal movement of animals and people, often for political reasons, is responsible for spreading the disease. Although the mortality rate is low, outbreaks of lumpy skin disease occur annually across a wide range of areas, despite the availability of effective vaccines. Prof Venter explains that the main reason for outbreaks could be that farmers generally do not vaccinate their animals. Clinical signs include necrotic skin lesions, oedema of the limbs, and swollen lymph nodes. The skin lesions are economically devastating to farmers wanting to sell hides. Lumpy skin disease can also cause temporary sterility in bulls.

Prof Venter has certainly had a very active research career to date and has made a significant contribution to knowledge of veterinary tropical diseases. She is very excited about doing further research on arboviruses. All her research is done in the SANAS accredited laboratories of the Department of Veterinary Tropical Diseases. 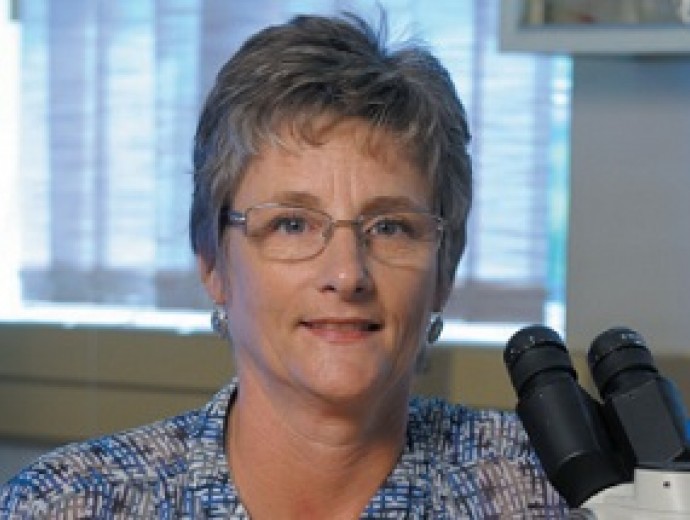