A study, and subsequent report, of the complete genome sequences of plaque selected isolates of each of the three virus strains included in a South African commercial trivalent African horse sickness attenuated live virus vaccine, was conducted.

African horse sickness (AHS) is caused by AHS Virus (AHSV), the genome of which is comprised of ten segments.  In South Africa, a polyvalent AHS attenuated live virus (ALV) vaccine is manufactured by Onderstepoort Biological Products (OBP) Ltd.  This vaccine is supplied in two separate vials each of which contains different AHSV serotypes : Bottle I is trivalent and contains serotypes 1, 3 and 4 while Bottle II is tetravalent (x 4) and contains serotypes 2, 6, 7 and 8 (2).

The research team studied the full genome sequences of AHSV1, AHSV3 and AHSV4 which were isolated from Bottle I of the AHS-ALV vaccine.  The individual serotypes were independently isolated, and each was passaged been one and three times.  AHSV dsRNA was extracted from virus-infected cells and sequencing templates were prepared.

The full genome sequences of the attenuated AHSV serotypes 1, and 4 viruses, which are precursors of the respective AHS-ALV virus strains, are available for public scrutiny from GenBank as accession numbers FJ183364-FJ183373 and KM820849-KM820858 respectively.  The pairing nucleotide sequence identity of AHSV1-OBP vaccine and Attenuated  serotype  1 was 99.643%, whilst that of AHSV4-OBP vaccine with Attenuated serotype 4 was 99.625%.

The full genome sequences of the AHSV serotype 3 from which AHSV-3-OBP are available for public scrutiny from GenBank as accession numbers KM886354-KM886363.  The pairing identity between AHSV3-OBP and AHSV serotype 3, over nine of their ten genome segments was in excess of 99.7% whilst that for the segment carrying the gene encoding the highly conserved VP1 protein was appreciably lower at 94.86%.  Further analysis of these sequences clearly showed that AHSV3-OBP is a reassortant comprised of nine genome segments likely derived from an AHSV serotype 3 ancestor closely related to the vaccine.

Comment : Having the sequences of the vaccine viruses means that when we do outbreak investigations, we can categorically determine whether we’re dealing with field virus, or a virus in which the vaccine is playing a role.  These findings therefore provide the basis for investigations into any future outbreaks, and the potential role of vaccine viruses.

Note also that this addresses Bottle I only of the vaccine.  Study is underway on Bottle II, the findings for which will be published in due course.

The objective of this study was to assess the AHSV type specific (TS) RT-qPCR tests in a multiplex (3 triplex tests) for the rapid typing of AHSV positive samples.  Such tests facilitate in the rapid determination of the virus type in field outbreaks of AHS, thus facilitating implementation of appropriate vaccination and control strategies.

Samples are able to be extracted and evaluated by AHSV RT-qPCR within 4 hours after their arrival at the laboratory.  In this study, as the samples had already been extracted the AHSV RT-qPCR was done in 2 hours.

The 291 horse blood samples that tested positive by AHSV RT-qPCR were also evaluated using the AHSV TS RT-qPCR tests.  Of these 156 were VI positive.  All 9 serotypes of AHSV were isolated from these 156 samples, and there was agreement in the results by the two methods.  AHSV type was also determined by AHSV TS RT-qPCR for the 135 samples that were VI negative, but AHSV RT-qPCR positive.

The use of group-specific AHSV RT-qPCR in conjunction with AHSV TS RT-qPCR tests provides an attractive strategy for improved AHS surveillance and outbreak response protocols.  Similarly the use of these tests will lead to a better understanding of the epidemiology of AHS, as the applicability and practicability of the AHSV TS RT-qPCR are superior to those of traditional VI and PI tests for virus serotyping.  Importantly, virus serotype was readily determined in samples that were positive by AHSV RT-qPCR but negative by VI.  Use of both tests in tandem will be invaluable in expediting outbreak responses, such as those that have occurred in the AHS surveillance zone of the AHS Control Area of South Africa.

The geographic distribution of the viruses included in this study can be seen in the map below. 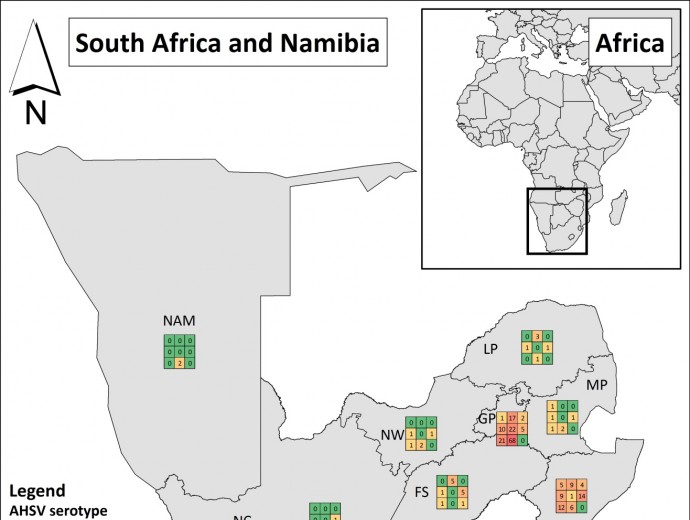