This study took place over a few years, with the paper being published in 1996.  Here is an edit of this paper.

An epizootical study of wastage in Thoroughbred racehorses in Gauteng, South Africa

Wastage is the term used to describe the loss of racehorses from conception to adulthood due to death or injuries, where they never reach the racetrack, or the days lost by racehorses due to not training or being withdrawn from a race.  This study was conducted to investigate wastage in Thoroughbred horses used for flat racing in Gauteng, South Africa.

Similar studies have been performed in Newmarket, United Kingdom, at Canterbury Downs in Minnesota and of the Canadian Standardbreds.  However, since no data on the incidence of wastage in South Africa were available, this study was implemented.  Data from 6 racing stables were recorded from March 1993 to February 1994.  Each trainer was required to complete a daily training record of the horses in his stable.  The questionnaire included reasons why a horse failed to train on a specific day, or was withdrawn from a race.  During the year 8.1% of the total potential training days were lost by horses in the stables investigated.  Of these 72.1% were due to lameness, 8.6% to respiratory problems, and 19.3% to other causes (bad weather, vaccinations, wounds etc).  The horses with respiratory conditions showed one or more of the following symptoms : coughing, nasal discharge, pharyngitis, epistaxis and upper respiratory noises.  The data on the causes of lameness were not included in this study owing to the absence of veterinary confirmation, or that more than one cause of lameness was cited by the trainer in an extended convalescence period.  The lost training days for the individual trainers ranged from 5.4 to 12.6%.

The study was continued in 1994/95, but the numbers of days and horses were not added to the first year’s results due to marked decrease in the return of questionnaires from the trainers.  However, it was evident that the percentage of training days lost was similar to the previous year, as were the percentages of loss due to lameness (66.9%) and respiratory problems (8.4%) similar to the previous year.

The increased incidence of lameness in autumn months may have been due to relatively low rainfall and temperature, resulting in harder tracks, but there would have to be other causes, as winter also experiences low rainfall, and there was no significant increase in lameness during this season.

The study showed a relatively low level of wastage due to respiratory problems (8.6%) compared with previous studies by Rossdale et al (20.5%) and Herzog & Lindner (22.6%).  This could be attributed to the fact that there are lower temperatures prevailing for a longer period of time in the United Kingdom.

The increase of the number of training days lost due to respiratory problems in winter may be caused the lower temperatures or poor stable management.  During winter it is common practice to close stables up with the intention of keeping the horses warm, thus affecting ventilation and increasing residual dust.

There could be several causes for the difference in training days lost due to lameness between 2- and 3- year olds, such as that 2- year olds may only start racing from 1 October in the year they turn 2.  Trainers may also tend to spare the 2-year olds and push the 3-year olds harder to perform.

From the data collected it was concluded that lameness and respiratory conditions were the two most important causes of wastage in Thoroughbred racehorses in Gauteng in 1993/94.  Continued research should be conducted to increase our knowledge of the reasons for the occurrence of these conditions in order to prevent them and minimise their effect on Thoroughbred racing in South Africa.

Dept of Surgery, Faculty of Veterinary Science, University of Pretoria : A Olivier

SURVEY OF SELECTED DESIGN AND VENTILATION CHARACTERISTICS OF STABLES IN THE PRETORIA, WITWATERSRAND AND VERENIGING AREA OF SOUTH AFRICA

The cost of building stables is a major capital expense that faces horse owners today, with the cost of building traditional structures being so prohibitive as to have people resorting to using non-traditional materials and designs.  There has also been a trend towards housing several horses in large barn-type buildings, which has made it more difficult to provide a suitable environment for the horses in the buildings, and thus to effectively control disease.

If only considered from the point of view of the horse’s health, it would be optimal to leave the animals outside year-round.  By providing adequate food and allowing the horse to acclimatise to normal seasonal changes, horses would develop a good coat and there would be no further need for protection from the elements than that provided by windbreaks and trees.  However, today there are many factors that require that horses be stabled.  Therefore the first essential of stabling is to give the horses as healthy an environment inside the stables as they would have outside, and adequate protection from the elements.  Stables should also provide a good environment and facilities for the people involved with the horses.

The essentials that should be provided by stables are :

The main factors that affect the climatic environment of stables are ambient temperature, relative humidity, ventilation rate and air movement.  To provide stabled horses with the correct climatic environment and reduce the likelihood of disease it is important to consider the horse’s physiological needs.

In South Africa, the coldest temperatures experienced in stables during winter are well within the horses’ range of comfortable temperatures.  As such one should not be concerned that a well-ventilated stable will be too cold.  In summer, on the other hand, the temperatures often exceed the upper limit of the temperature comfort zone for horses, so measures to maximise ventilation to ensure lower indoor temperatures should be adopted.  Incorporating optimal ventilation will also help to provide the ‘fresh-air’ that is so vital for the stabled horses’ respiratory health.

It was evident that many design features and management practices were aimed at keeping the horses warm, in spite of the mild South African climate.  Due to the wide thermal comfort zone of horses, this is usually totally unnecessary, and is further more detrimental to the health of the horses.  The practice of closing top stable doors or shutters on barns, should be avoided year-round.

Excellent computer models are now able to predict the impact of stable design will have on the temperature, humidity and ventilation of the stable, and should be adopted when designing stables.  They also allow one to investigate how to improve ventilation in existing buildings.  The authors of this paper offered their expertise to assist with building or improving current buildings. 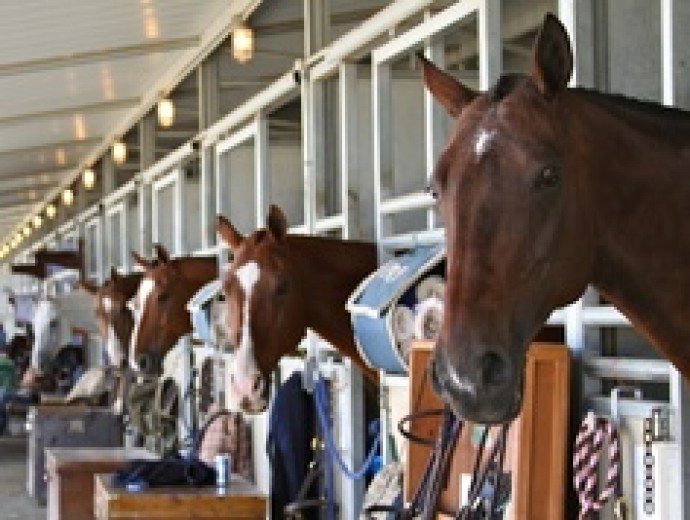